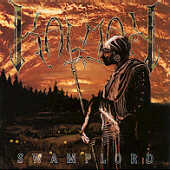 “Swamplord” is a debut from this new Spikefarm band that, unsurprisingly, plays a melodic version of black/death metal. Unsurprisingly? Yes, just check the line-up, there are 3 members from Eternal Tears Of Sorrow and if you follow Finland’s metal scene in the slightest, my statement wouldn’t sound so shocking.

So, what do the Kokko brothers and 3 ETOS members have is store for us? The easiest answer would be a more extreme version of the above mentioned mixed with Children of Bodom. Sound good? You bet it does. Guitar work on this album is exceptional; heavy, fast and amazingly catchy riffs backed up by excellent solos make “Swamplord” a listening pleasure. Pasi Hiltula’s keyboards, rather than taking a leading role like on COB’s “Follow the Reaper”, are well visible but don’t take over as a main instrument. Add very aggressive but understandable screams and a rhythm section that varies from mid-fast tempos to insane blast beats and this short album, which lasts for only 36 min. will seem like 20 at best. Every track is so tight that you’ll quickly lose track of time while listening to it.

Picking the best track is almost impossible because the whole album is flawless and kept on a very high level of musicianship, filled with great musical ideas. There are simply no bad songs or fillers on it but my favorites would be the slowest and most catchy ‘Dance of the Water’ that adds needed variety among most of the fast tempo tracks.

I am a bit disappointed that there is little innovation on this album. The safe-side, or rather “what sells”, route was chosen but musically there is nothing to complain about and I can't wait to hear more from this band, especially now that two members, Altti and Petri, have recently left the band, which can only mean less Eternal Tears of Sorrow influences (meant with nothing against this great band) and more of their own original ideas.

Bottom Line: Fans of melodic death, guitar driven albums can pick it up in a heartbeat.