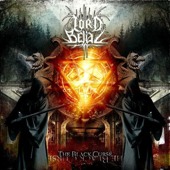 Lord Belial are still active? Well, is this really necessary? Don't get me wrong, they never became disloyal to the spirit of more or less extreme metal, but they also mostly failed in order to produce an outstanding work. Seen from this perspective, The Black Curse marks a pretty typical work of the Swedes. The vast majority of the songs passes by without leaving a lasting impression. Yet there is at least one exception.

"Ascension of Lilith" combines all the trademarks Lord Belial want to stand for. Memorable guitar lines, powerful drumming, expressive vocal lines, demonic background vocals and an intense overall picture. Although the track crosses the seven-minutes-mark and does not lack different layers or tempos, it keeps its traceability from the beginning to the end without being boring in any way. Thus, the band delivers a little gem of melodic yet punchy black metal. Too bad that this remains an isolated case. Lord Belial seem to suffer from compositional deficiencies, because so many parts of the other songs remain relatively faceless. The good, transparent and vigorous production - including a powerful bass guitar - tries to showcase the greatness of the material, but you cannot make a racehorse out of a hamster. Okay, this comparison might be slightly unfair. Yet it is true (in my humble opinion): Lord Belial regularly fail to transform their talent into great songs and thus one listens to an ambitious album of habitual underperformers. Indeed, sometimes it seems as if the band wants simply too much. "Unorthodox Catharsis", to give but one example, starts promisingly with respect to its hammering beginning. A nasty and ominous intermezzo convinces as well, but a few pretty mild sections cause a loss of strength. At the end of the day, the song sounds pretty okay, but that's not enough in order to withstand the competition.

With the mix of a black metal frame and some tradition-conscious heavy metal sections, the band is caught between two stools. I don't want to say that the album suffers from a lack of coherence, but I know definitely more homogeneous outputs. And there is another thing that annoys me. The drumming sounds pretty sterile, especially during the fast parts. Each and every rapid sequence seems to be offered in the identical velocity. Flops like "Inexorable Retribution" make the picture complete. The band needs an expert that connects the different parts of their songs skillfully, because this is exactly where the only songwriter Thomas Backelin shows significant weaknesses. Not to mention a few really lame sections every now and then.

However, perhaps there is a hungry target group that appreciates precisely the mix of narrative sections, mild melodies, double bass carpets, a couple of robust riffs that are accompanied by a pumping bass ("Devilish Enlightenment") and robotic snare hammering. I have heard that there even exist some dudes who like Manowar, but I am sure that's a vicious lie. Either way, my advice for Lord Belial is to focus on more logical, but not predictable song patterns or to call it a day.