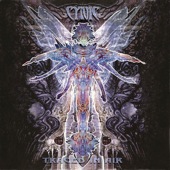 I was not very aware of who Cynic was at the start when I had gotten the CD... hearing the name only in passing over the years. I went online and did my research on the band for quite awhile... and came out intrigued as all hell, excited with finding out said things and now can describe myself as being a fan of the band.

Back in 93', Cynic had released their debut album called "Focus" (which I never heard until doing the research) on to the world. By all accounts I could find through investigating and talking to people and listening as well... everyone said it was a Progressive Metal masterpiece... and I have to agree. Shoot ahead fifteen years later, they release their follow-up to it called "Traced In Air". A long time between albums... but after hearing "Traced In Air"... I gotta say it is well worth it.

Cynic is so bloody amazing, I cant believe it even after listening to it multiple times. Talent is a word seriously overly used in ever facet of life today, but this band really does epitomises the using of this term. They are heavy as anyone out there in metal today, but they are also some of the best songwriters I have heard. They are complex as all hell, but it is catchy and seems to feel as if their technicality never talks down to you. They bring Prog Metal to be accessible to the metal mainstream.... A feat even the mighty Opeth never quite got right.

Songs like ‘Space For This’ show heaviness and complex arrangements do go well together... while ‘The Unknown Guest’ is spacey and heavy while the mix play of guttural vocals and clean ones creates a amazing sort of feel that weaves through the virtuosic guitar lines that ebb and flow like the angry seas against the coastline. Close your eyes, and they make the world they sing about dance in your mind.

Back when Cynic’s first album was released, I was more into the Black and Doom Metal at the time... so it is not hard to see why I never listened to their first one. Now that I am older (and hopefully) wiser while probably being a way better musician by now... I see Prog Metal to be pretty amazing, and Cynic is the one to beat.. Sorry Opeth and all of the wannabes... the Prog masters are back and have ripped the crown away for their own!.