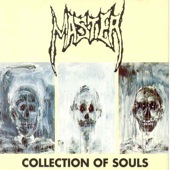 Frankly speaking, Master belong to a pretty miserable species of bands. They have more albums than good riffs. I realized it too late, that's why I even bought their third album. I hoped that this would be their first pretty good work after their performance increase on the second full-length. Well, optimism sucks. The yellow vinyl was a bargain, nevertheless, it was too expensive. The idiotic artwork serves as a bad omen and the second hit below the belt is not long in coming. The sound of Collection of Souls celebrates dullness in its full splendor. Regardless of the original vehemence of the compositions, the album does not develop the smallest degree of penetrating power. The mishmash of guitars, drums and vocals without bass guitar destroys the competitiveness of the record sustainably.

Aggravating the situation, a rather slow-paced track like "Hidden Stories" has absolutely nothing that makes me prick up my ears. It's just a waste of time. More songs enter one ear and exit the other without leaving a lasting impact. The level of complexity does not surpass that of a usual At War composition, but the combative trio from Virginia can rely on its good instinct for effective riffs. This is exactly where Master fail. Their run-of-the-mill guitar work is not totally annoying, but faceless and vapid. Even worse, the songs do not evoke any emotions and the non-charismatic voice of Speckmann fits the mediocre picture. No high-pitched tones, no low-pitched tones, just one monotonous tone. A song like "Blinded Faith" would have deserved a better production and an expressive vocalist, but both is not in sight.

The album clocks in at less than 35 minutes, but even this rather short playtime is too long. The Thin Lizzy cover appears as a foreign body and does not make any sense, tracks like "Justice or Fate" do not reach a more than decent level, because any kind of catchy, exciting or blazing elements is completely missing. No doubt, there exist worse albums that pollute the planet. Compared with Atrocity's "Werk 80", Collector of Souls appears as a magical moment in the history of harsh music. But in comparison with hundreds of other metal works, Master's third full-length is shrinking to its actual size. The closer "Silver Spoon" conveys a slight idea that Master have more potential than they have shown on the first eight tracks. Well, too little, too late.

At the end of the day, I respect the stamina of Speckmann and I am sure that he is a man of conviction. But he is no great songwriter, his generic ideas do not present any kind of unique selling propositions and he overestimates his vocal artistry. It is an ironic twist of fate that one of his sidekicks is listed as "Brian (Einstein) Brady", because this vinyl is light years away from ingenuity. I cannot give a recommendation to anyone and this is a little bit sad in view of Speckmann's integrity, but we do not need more bands than fans. More or less amateurishly designed death metal leaves me cold and therefore Master and me parted ways after this work. I am sure, neither Master nor I had feelings of loss.