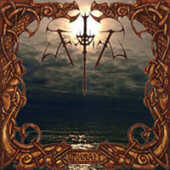 Viking metal from Scandinavia?! Now there is a surprise. Thyrfing write epic, black-ish tinged, medieval ridden metal in both their native language and English. They’re a standard six-member heavy metal band (vocals, 2x guitars, bass, drums and synths) who from their band photos really get into the Viking, historical side of their namesake. Dwarfs, swords, Odin and travelling in big boats is the norm for these blokes. But traversing through Viking metal they do with real ‘oomph‘ (‘oomph’ is good, it means grunt).

I’m actually rather loathe to classify Thyrfing as ‘Viking’ metal and would prefer them deemed more medieval in stature (barring the lyrics and song topics), because the music by these lads instantly conjures up thoughts of taverns and bards playing their lutes, surrounding by brave knights and their not-so brave squires. Regardless of what location of primitive life you thrust Thyrfing’s “Urkraft” in, make sure do take the time to check ‘em out.

Thryfing’s music prowess resides heavily in black metal, steeped with 80’s guitar work and perhaps slightly (only, ever so slightly) overdone synthesizer work from Peter Löf. Thomas Väänänen’s vocals strongly hold this medieval metal masterpiece together. His deep bellow reminds a great deal of Johan Hegg’s infamous roars courtesy of Amon Amarth. For the first time, clean singing has been effectively utilised by Thomas Väänänen and to a great effect (I mean what black outfit doesn’t use clean vocals?), sounding something like an Athera (Susperia), an ICS Vortex (Dimmu-Borgir) and perhaps slightly King Diamond-esque, but possessing something unique of his own.

Song structure on “Urkraft” ranges from your average terror driven 4-5 minute black blast, to nice flowing short acoustic instrumentals that Opeth or Bathory would be proud of. Throw in for good measure 2 or 3 epic 7-8 minute Viking mammoth songs and top it off with a cover Gary Moore’s ‘Over the Hills and Far Away’ and you have a very solid third release from Thryfing.

Bottom Line: Thyrfing are a tight unit of barbarous heathens who swing their axes with unrivalled brutality and melody. “Urkraft”, likewise is just as tight as their musicianship, which is indeed a good thing. Nothing sorely lacking on this third opus from Thyrfing.