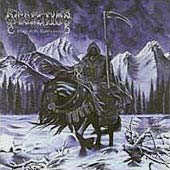 I was happy about the recent 63%-review for “Storm of the Light’s Bane”. Not because of the rating itself. Even though I know that it is useless to discuss about personal taste, I think the author has taken a position that is similarly promising to General Custer's Last Stand Hill back in 1876. The ending is known. Nevertheless, I was happy about the review, because it triggered some reactions in the forum and reminded me of the fact that this is (one of) the last classic album(s) in my collection I haven’t reviewed so far.

The first thing I must mention is the iconic artwork. Its message is totally clear, it spreads an overwhelming atmosphere and the meagre choice of colours merges death and the landscape to a single, murderous panorama. What I fool I was that I bought the CD back in 1995, not the much more fitting vinyl format. However, this cover prepares the consumer perfectly for the musical content. Dissection did not try to score with overly brutal gimmicks or any form of blatant shock effects. Mastermind (or better: sick mind) Jon Nödtveidt had not written extremely harsh tracks. Especially “Where Dead Angels Lie” follows on almost mild approach. It’s a sort of black death metal ballad with a sanguinary undertone. Okay, musically it is not the most exciting track and from my point of view, it lacks dynamic. Nevertheless, this experiment has not gone wrong. Although I listen to the “worst” regular track here (intro and outro do not count in this context), it is still a solid number and abysmal evil.

Anyway, we find the real killers somewhere else. Especially the quasi title track “Retribution – Storm of the Light’s Bane” has an enormous inner strength. It belongs to the most angry songs here and, better still, it spreads more or less the same vibes as the band’s best song ever, “In the Cold Winds of Nowhere”. Dissection arranged the album very well, the sharp-tongued outbursts of (always controlled) fury alternate with those compositions that offer a tragic touch as well. A masterpiece like the multi-layered “Thorns of Crimson Death” features both in one. The melancholic guitars at the beginning draw large, broad lines and later there is an acoustic intermezzo with rumbling thunder in the background, perhaps inspired by some atmospheric sounds of Bathory. Yet we also get a section with rapid drumming and neckbreaking riffing which is offered on a probably very high technical level. The “Cold Winds” on the eighth position marked the hidden champion of the debut, “Thorns…” follows in its footsteps in this respect.

The album does not lack harshness or profound depth, quite the opposite. Yet it’s most impressive detail is a pretty classic one for a sonic artwork. The melodies on this full-length are simply precious treasures, formed of perfectly matching notes. Even “Unhallowed” and “Soulreaper”, two furious, diabolic heralds of upcoming Armageddon, captivate with this element, which is masterly integrated into the nightly, blustery surrounding. Dissection vary density, tempo and intensity in an almost god-like manner and not only the chorus of “Unhallowed” has the might to drive guys with an affinity for dark sounds insane. By the way, the titanic power of the songs is not supported by the production. It’s a good mix, but not an outstanding one. A few details leave room for improvement. For example, the snare gets nearly lost during some fast sections. It doesn’t matter. The compositions speak for themselves and the mastermind’s voice complements the instrumental orgies very well.

Maybe Nödtveids criminal “career” helped his band to achieve cult status. I don’t think so. Both classic Dissection works marked massive statements and reflected his outstanding song-writing skills. Not with each and every cut, but often enough to realise his fascinating potential. If he had been less… well, satanic, sick, weird (make your choice), then today he could be the leader of a band that could rival the divine Necrophobic. The energetic, pulsating and belligerent “Night’s Blood” is just one of the songs that would enrich even the catalogue of those who exist in the dawn of the damned. But some people’s mind is forged in blood by tragedy, to quote Jon himself. Thank God, this cannot be said about reviewers who do not understand the dimension of this masterpiece. They just have a different opinion. That’s okay. The “Storm of the Light’s Bane” does not care.

Out of all the albums a person owns, there are inevitably a selection of them that the fan prizes the most. For me, Dissection’s “Storm of the Light's Bane” is one of those. When I was getting into the scene, I was blown away by the music that lies within. Dissection is absolutely one of the very best and most influential bands of the early 90’s Death/Black metal scene, and this is why “Storm of the Light's Bane” is essential.

With only two albums in creation before Jon Nodtveidt was convicted of murder, “Storm of the Light’s Bane” is the second piece of work from these Swedish innovators. Music-wise, this album is flawless all the way through. While the band does not prefer to be labeled as black metal, it’s pretty undeniable that they were influenced at least partially by the genre. But, there is much credit due to death metal as well. The band did a great job of possibly pulling together fans of both genre’s, and many others due to the dark melodies in the music. While melodic, it still retains its excellent cold, grim atmosphere. In fact, melody is one of the main factors in the music of Dissection. They compose everything flawlessly. The music is mainly mid-paced, and holds the quality of something that can be truly memorable, or within a period of time, very nostalgic. Every time I listen to this album I’m still amazed by every detail of the music.

If you’re looking for something unrelentingly fast and a full on shred fest of solos, look somewhere else. As a band, Dissection are not only amazing at their instruments, but they are great musicians too. The band is very precise and tight, playing together without much friction at all. Vocalist/Guitarist Jon Nodtveidt is one of the most talented people to ever grace the scene. His vocal performance is extremely well done and fits the music better than many other bands of the same type. And his guitar performance along with Johan Norman is great. Guitar harmony, alternate riffing between black, death, and sometimes folk, and they both work very well together. The rhythm section of bassist Peter Palmdahl and drummer Ole Ohman is excellent as well. Not trying to hog the spotlight, but just doing an excellent job at creating the best backdrop for the music as the possibly can. They are both have done an excellent job. Dissection is an amazing band both as musicians and as songwriters, and it’s a shame that they are no longer together.

Bottom Line: I can’t think of a single reason not to own this masterpiece. Any fan of metal will be able to find something positive about this record, if not being truly inspired as fans, musicians, or artists by it.

Dissection is undoubtedly the finest band to come from Sweden bearing the "Gothenburg" banner. From the beautiful melodies to the cold and grim riffs, every song from Storm is just perfection beyond belief. Signed onto the mighty Nuclear Blast label and ready to unleash a follow up to the dark and cold sounds of the "Somberlain", Dissection, with one majestic record, prove to the world that they are truly the best at what they do.

Barred by a short intro (first track) and outro (last one), Storm... essentially only has six actual songs, and damn fine six they are. None shorter than five minutes, each never fails to totally blow you away with its beautiful mix of melodic finesse and rhythmic flawlessness. Jon Nodtveidt, the main guy behind the band, displays complete and utter talent to write the most beautiful and gut-wrenching melodies the guitar is capable of creating. This is the most brilliant show of the fusion of pure beauty and cold darkness I’ve ever heard.

Dismal poems would be the best way to describe the lyrics here, each one telling a story of corrupted goodness and the dark core of evil itself. And Jon’s sinister voice fits the mood of the music perfectly.
To absorb all the aspects of this albums perfection, you must listen to it a few times. And only then do you absorb it completely. The drummer is constantly adding fills with the double bass drums. The guitar melody is always evolving, as are the song storylines, until they reach a magnificent climax of utter perfection.

There’s nothing more to say, this is a metal masterpiece.

Bottom Line: Words simply do not describe Dissection. This is one of the best albums I’ve ever had the honor to put into my player.