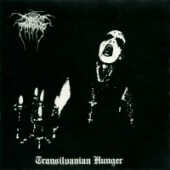 The production? A sheer catastrophe. The music? Painful nonsense. The artwork? Which artwork? The album as a whole? Fantastic!

Indeed, it belongs to the great mysteries of mankind that so many people are able to love this prime example of sonic ugliness. But the more a band pisses on commercial conventions, the more we can assume that the musicians have an artistic vision and the aim to mirror a part of their personalities. This is probably a very important aspect of art in general: the artist shows a part of herself or himself in order to give the audience the inspiration to seek for further insights. Well, I don't think that Fenriz or Nocturno Culto thought about such things when forging the explosive killer tracks for Transylvanian Hunger and this was probably the best they could do. Anyway, they created a milestone of cold hate, pure misanthropy and unleashed velocity.

Each and every track is like a ferocious pursuit. Darkthrone hunt for the most repulsive appearance and they are, no doubt about it, successful. The vocals deliver nothing but snotty screaming, the guitars sound totally crude and create infernal leads that embody a mix of insanity and horror while the drummer is already insane and thrashes his kit constantly with full force. Repetitive lines are not forbidden, but they do not cause boredom, because this orgy of high speed leaves no time to pause. By the way, Darkthrone cannot completely suppress their musical skills and therefore the seemingly nonsensical structures reveal a surprising depth and more substance than I thought when listening to this exploration of the extremes for the first time. This is no half-baked snot, the songs follow - voluntary or not - a coherent pattern. But don't wait for comparatively "epic" numbers like 'To Walk the Infernal Fields' from Under a Funeral Moon, their first experiment in terms of a crude mix. This time Darkthrone focus on speed and they don't do things by halves.

The back-cover heralds "Norsk Arsik Black Metal" and this cheap provocation fits the scheme. On the one hand, it shows that Darkthrone do not take care about the expectations of their business partners. On the other hand, it is aligned with the musical content: we are ugly, please f**k off. However, this slogan remains dubious, to say the least. But the entire full-length remains dubious, just think of the involvement of Greifi Grishnakh, another formidable expert in terms of "Norsk Arisk" matters. He wrote the culturally valuable lyrics for the second half of the album. Frankly speaking, a song title like 'As Flittermice as Satans Spys' sounds like a persiflage to me. No doubt, this fourth album of Darkthrone belongs to the most polarizing works of the last century, but its influence on the scene cannot be denied. And even if this were not the case, the album definitely stands on its own feet. More independence is nearly impossible.

Do I have something to criticize? Well, the ending of the second track is ridiculous, even the legendary fade-out of Sodom's "Outbreak of Evil" on their first EP sounded less amateurish. Maybe the entire song does not spread the massive amount of vileness that characterizes the further pieces. Anyway, this is no big deal and therefore I would like to come back to "In the Sign of Evil", the first vinyl of Sodom. Perhaps there is a musical and spiritual connection between this EP and Transylvanian Hunger, because both works spat in the face of the business. Darkthrone just took the next stage. I don't want to blame Tom Angelripper, but I think it is common sense that Sodom were non-experienced newcomers when it came to the recording of their debut. Therefore, their slightly crude result was more or less logical. By contrast, Darkthrone had already some albums under their belt, but they decided voluntarily to have this atypical, non-massive yet hateful sound. So, it's up to you: lend an ear to the somersaulting opening title track and test its effect on you. If you don't like the first 15 seconds with its merciless guitar cascades and its rabid drumming, you will hate the album. But I say:

The production? Unique. The music? Wonderful. The artwork? Absolutely suitable. The album as a whole? A milestone.

Where do I start? The mediocrity of this record or the fact that these guys were actually considered to be the elite of their kind in the early black metal scene?

For a "true" black metal fan, this epitomizes everything that the genre was meant to be. Dark, cold grim, evil... From almost anyone else’s point of view, this is one of the most pathetic albums that ever got the privilege of being released. Boring, repetitive, unbearable... Since I am proudly "someone else" and not a "true black metal fan", I’m simply gonna tell it like it is.

Ever wonder why the hundreds of follower black metal bands that keep appearing from Scandinavia don’t play Darkthrone’s style of "True Norwegian Black Metal"? Because IT SUCKS!! And the only black metal bands that get real worldwide attention are ones who have true musical potential, like Emperor and Dissection.

"Transylvanian Hunger" is a collection of probably the most pathetic songs that have ever been branded metal. Each track is horribly repetitive and only progresses just before it gets completely unbearable. Three or four different notes being slowly trilled (double picked) is what’s considered a riff for Darkthrone, and they can’t seem to play anything else on the guitar. Bass is completely inaudible. The drummer pounds a steady, even beat for five minutes and actually adds a fill or two in the duration. How dares he? Is he trying to make this album interesting or something? I’m surprised he wasn’t fired (or sacrificed to Satan) on the spot for trying to change the initial plan of making the world’s most boring record.

The singer rasps indiscernibly for about 60% of the track time. He sings in mostly in Norwegian but you couldn’t hear what the hell he’s saying anyway, so there’s 60% of the CD that I’ll take off the 6 points for, since it’s a complete waste of time. And the rest is taken off for the crappy music.

Bottom Line: Influenced by Venom (an absolute joke of a band) and played by talentless "Satan worshippers", I should have known better. I promise you: this record will cure insomnia!