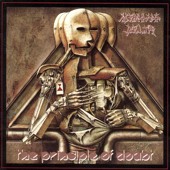 ::   ::
Type: Full-Length
Release Date: 1989
Label: Aaarrg Records
Genre: Progressive, Thrash
1 A Question Of Trust
2 The Principle Of Doubt
3 Once I Believed
4 Ever Since Time Began
5 Curse Of Reality
6 Twilight Zone (Lord Fouls Hort)
7 Shades Of Doom
8 The Jester
9 El Colibri
10 No Friend Of Mine

In a polarizing world which knew nothing but thrashers here and posers there, I always subsumed Mekong Delta under the first category. Their real style has remained elusive. The songs mostly rely on conventional patterns and even though they like to demonstrate their technical skills in the form of instrumental gimmicks, I would not call The Principle of Doubt a progressive thrash album. I really have doubts (pun!). I don’t think that it is progressive – Watchtower’s nearly simultaneously published “Control and Resistance” is much more complex and much more difficult to decode.

Nevertheless, there are progressive or at least unusual components that show up on Mekong Delta’s third full-length. The creeping 'Curse of Reality' with its ancient Rome aura features wind instruments and fragile, high-pitched singing and even ambitious archaeologists will not dig out many comparable songs of that era. Given this fact, one can label the material as vigorous, sometimes rapid metal with slightly bulky riffs and occasional progressive ingredients. However, it is anything else but typical German thrash from the eighties. Mekong Delta stays lightyears away from the rumbling chaos of early Sodom or Kreator and they also cannot be compared with the more technically oriented attacks of the young Destruction.

I mentioned the rather conservative song patterns, but this does not mean that the album lacks diversity. Mekong Delta knows how to form thrilling songs with surprising elements which are mostly based on unexpected breaks. Fortunately, these breaks are no end in itself. The coherence of the respective track is always in the focus of the musicians and this laudable way of proceeding leads to five hits on the A side of the vinyl. It doesn’t matter whether the needle of the tone arm touches the furious opener 'A Question of Trust', the dark and powerful yet melodic 'I Once Believed' or any other song. The level of quality is constantly high and even though the production is not highly differentiated, the mix does not give reason to lament.

Alas, the B side is not able to keep the class of the album’s first half. The orchestral 'Twilight Zone', a wannabe gloomy instrumental, does not really fit the context of the remaining material. The second instrumental 'El Colibri' makes the album almost derail in view of the watery guitar line – thank God, it’s just a brief intermezzo. More relevant is that the three songs with vocals do not reach the level of those of the A side. The guitars are not able to create exciting vibes and some instrumental parts are going nowhere. I am not speaking about dramatic failures, but compared with the first five tracks, I also cannot ignore the significant quality loss. The B side lacks emotions and the mechanical creature of the artwork appears almost as a bad omen for the relatively soulless second half of the vinyl. Yes, back in 1989, the times were polarizing, but this is not to say that shades of grey did not show up occasionally – for example in assessing this album.