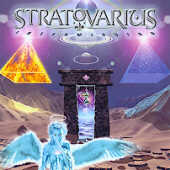 Our Finns had enough... after eight full-length albums Stratovarius decided to take a 2-year brake to pursue solo careers and to simply recharge their batteries. "Intermission" as the title states, is a gift to the fans before this long break and it features 4 new songs, 3 covers and 8 bonus tracks previously released on various albums or on 7" singles.

But... is this compilation worth your hard-earned change? Yes and no.

On one side, the whole idea of making this album with new and rare tracks only is well worth it. Instead of giving us one of those “the best of” albums with half of the tracks you’ve never heard of or skipped during the first listening, Stratovarius decided to show us what was supposed to be limited to the few parts of the world. If that’s not enough, money-wise, it can’t get any better than this. Instead of paying top $$$ for export titles with just one extra track you can get everything on one CD at regular price. And unless you are a diehard fan that has to have all editions of every album it’s as good as it gets.

On the other side, we all know that most of the time bonus tracks are just marketing tools and are not treated as ‘normal’ songs even by the bands themselves. Knowing that, I didn’t expect top quality throughout the whole album and, as expected, that’s exactly what didn’t get. Most of these eight bonus tracks are mid or slow tempo compositions with nothing more than average arrangements and mediocre melodic lines. Four new songs are 'Will My Soul Ever Rest In Peace', 'Falling Into Fantasy', 'The Curtains Are Falling' and 'Requiem'. The first three songs from this set are typical, Stratovarius sounding tracks which most probably were dumped during the "Infinity" session, and 'Requiem' is nothing more than just a keyboard outro and could be easily skipped. Let’s only hope that those tracks are not an indication of the band’s new material for 2003-release because they don’t bring anything new or innovative to their sound. As for the covers, Judas Priest’s 'Bloodstone' and two Rainbow tracks 'Kill the King' and 'I Surrender' are the top picks on this album and show Stratovarius’ real capabilities and talent.

Bottom Line: Nice collectors item but far away from their best stuff.