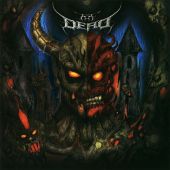 I was not really expecting this Australian Death/Horror metal band to do what they have done on this CD. I was looking for this perhaps for it to be an average outing that would show some signs of promise and end up simply entertaining me for a little over an hour or so. I got way more from The Dead.

Surprising me that these four blokes are out of Brisbane, Queensland... their album has travelled over to North America and tries to put their mark on the Death Metal market that is over here. In truth, they perhaps had done way more than that. More than just melodic, this band showcase that they are one of the heaviest bands as well, The Dead have release an album that has to be talked about, and Metal fans all over have to know about.

They are lyrically so nasty, so blood thirsty that they come across way better than any Stephan King novel I had the pleasure to read. They devilishly paint a picture filled with blood, gore and the darkened macabre of monumental horror like nobody else I have heard in a very long time. Lyrics that are overly simple at first glance, seem to make a story on their own in quick time fashion.

Each one of The Dead's songs, could be the basis of a really great horror flick, and the music would just be a wonderfully evil crafted soundtrack to it.... and the hellish, guttural way the singer brings it all together seemingly singing from the bowels of hell that makes even the mighty band Emperor sit up and take note. Musically, there can be only one word that can describe what this band is all about, and cone through clearly... stellar!

Putting it out there, for all of you to read.... The Dead are a serious force in the Death Metal world already in my books. Hope that they shall grace us with another album really damned soon as well. Musically and everything, they will lead the pack for the new breed of Death-metallers.