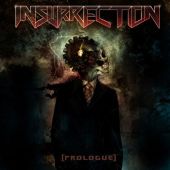 The province of Quebec in Canada has always seems to have some great Death and Black Metal coming out to lay waste on the rest of us unsuspecting fops around the globe. Insurrection is not just another one of those bands... they that seem to have it all and then some. They shred the competition ten fold.

Technical as hell, the band still is so bone-crushingingly brutal that is exactly the words I would describe this four piece from Gatineau Quebec. They are in essence, the poster children for the movement of the Canadian Wave Of Death Metal (CWDM). That movement has this strong sense of songs that are coupled music that is capable of tearing your head off sonically... and this is the band that clearly makes that all the more real.

Tracks like the brutal yet catchy 'Four more years' show that you can have great melody and less spead while still being so oppressively heavy, while the completely mind numbing 'Fear Tomorrow' simply shreds your brain into hamburger and threatens to cause the worlds Tectonic plates to shake. Each one of these songs, even the two in their native french language, are some of the most solid metal to come out in awhile here. This is Melodic Death Metal that really stands out.

Now that you have been told about this band, say 'oui, oui' (Yes, yes in French) and go out and get this band... and play it a loud as your city or town will allow you without cops coming to your house. If you don't, you are a complete poser!!!