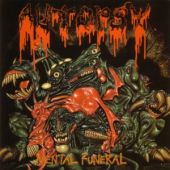 Autopsy were always something of an oddity. A US death metal band that had more in common sonically with their Swedish counterparts than their compatriots. Preferring a rumbling, sloppy mid-paced bulldoze, in comparison to, say, Morbid Angel’s surgical, lightning speed precision, there’s something delightfully sick about their sound. The drums clatter, the guitars grind, and the bass thumps – no pro-tools here - and of course, there’s nary a melodic chorus in sight. Just how it should be.

Mental Funeral is their second album proper, and is nothing short of a fucking riot the whole way through. As Chuck Schuldiner’s Death continued their progression through ever more technical territory, in many ways their former member Chris Reifert took the "Scream Bloody Gore" sound to the opposite extreme.

'Twisted Mass Of Burnt Decay' is a superb opener, one of Autopsy’s quicker songs, even including a brief, but ripping solo. As the album progresses, there is a constant schizophrenic switching between the various personalities of the band, from the creeping crawling almost doom of '...Winter', to the tremolo-picked riffs of 'Slaughterday', to the ultra-dirge of 'Destined To Fester', and back to the 40-second blastathon that is the immortal 'Bonesaw'.

Autopsy have remained somewhat unsung heroes of the scene since splitting, but it’s not hard to trace the influences that this record must surely have had on bands like Entombed, who share Autopsy’s love of the demonic Slayer-esque split harmonies that pepper the album. Iron Monkey and their ilk owe a clear debt, and one can even imagine acts as diverse as My Dying Bride and Darkthrone taking frantic notes on this wondrous platter of splatter, as it snaked its way through their speakers.

Rather than making its impact through memorable riffs (not to say that there aren’t any – check 'Slaughterday' or 'Dark Crusade' for proof) or killer songwriting, Autopsy succeeds by creating a genuinely horrific atmosphere. Mental Funeral is an apt title for an album that really plumbs the terrifying psychological depths in a way that most other DM bands just don’t manage to do. If it wasn’t such a cliché, I might say that Mental Funeral is the soundtrack to a film that’s not yet been made. I’ll resist, but they make it hard by including a perfect acoustic outro, that would really make sense over the end credits of some gore-fest or other.

I should also spare a word for the awesome cover art, which treads the fine line between repulsive gore, and funny as fuck.

Overall of my favourite death metal releases of all time, from an era when Peaceville failed to put out little that wasn’t essential for any metalhead. It gets better and better as the years pass, and if you consider yourself any kind of a fan of Death Fucking Metal, but don’t possess any Autopsy, you fail.