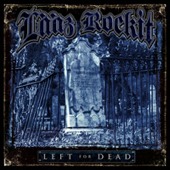 I remember this band so well... they are one of the founding groups that brought the term 'Thrash Metal' to the world on mass, and started the Bay Area scene that brought such metal luminaries as Slayer, Testament, Metallica and Exodus. When I saw the new album from them cross my desk here in late 2008, I was equally sceptical and excited.

Lääz Rockit is one of those watershed sort of bands, that changes the music landscape forever . They devised such powerful and in-your- face music that millions of metalheads actually latched on to and started a revolution of their own that we feel it's rumblings today. This newest album they have came out with just solidifies the fact that they were, and are, so damned good that many just have to stop and take note.

Sounding better than ever, I listened to "Left for Dead" with a growing sense of something grand was being made here. Songs like 'Ghost in the Mirror' and 'Turmoil' shoot out with fire and passion I have always felt while the unique 'Liar' shows just how much these guys have grown, without losing one iota of just what it is that made the band who they were. They still thrash... and thrash very hard. They show the old school way, and never once seemed dated or 'old'. One listen, and you will understand what I mean.

Yes, they have grown over the years... but they have still the fortitude to keep their music strong... and the testicles to never waver from that. They are back to show you that even though they were the ones who started this movement many years ago, they still are the ones to be followed... because they are Lääz Rockit!

Musicianship: 9
Atmosphere: 9
Production: 9
Originality: 10 (they have been the basis for all thrash since 80's)
Overall: 9