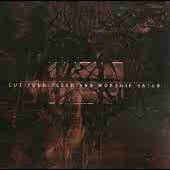 Whoa, with an album name like this and a totally indecipherable logo, these guys must be seriously evil!

Furious black-death metal from France that makes you wanna press ‘stop’ on your CD player rather than do what the title suggests. Blah, blah, blah, I’ve heard all the things the fanatics say about Antaeus and their kind, "complex, raw, totally Satanic and evil music the way it was meant to be". It may be that to some people but deep down it’s just a really really bad record done by a really really bad band. It seems complex because there’s pretty much no production done whatsoever. Everything is distorted and seems complicated simply because you can’t tell one riff from another and the drummer seems to follow no rhythm but does annoying blast beats and adds unnecessary drum fills every about three seconds.

The singer does the black metal rasp thing and once in a while adds a death growl just for good measure. Wow, all hail this master of the mike, he can do both! The lyrics aren’t printed because they probably suck as much as that new 12 year-old rapper’s. At least the kid’s on MTV and earns thousands.