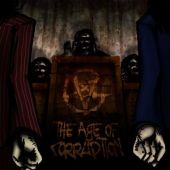 I have been waiting for the Anglo-Scandinavian explosion that is GraVil to release this one. I had given their past release that was aptly called "Something Eorth Chasing" EP a rating of 8.8 out of 10... now I have this brand new CD in my hot hands... and I am as exited as I felt when I had heard my first Iron Maiden gig so long ago now.

'The Age Of Corruption' blasts out of my speakers, and floors me from the very first beat that enters my mind. Maturity, brutality meets such overwhelming talent... they certainly have combined all of this to make a metallic force that can never be called lame or average. In mixing so many styles of metal together while also bringing so much originality as well, they succeeded in the creation of a amalgamated sound that is far beyond most scope that metal has taken on lately.

Full on Death Metal, Metalcore, Thrash and even some shades of old school Power Metal come together with that elusive X-factor that equals up to the purest of raw talent... ending up making everyone know that they just might be seeing the future of metal is right there. I had seen that so clearly on their "Something Worth Chasing" EP. The potential of how damn good they could get. Right now, GraVil have proven that in spades, and I see even more than last time that they have boundless greatness to come.

At the core of this band, there are only two main people (Gra, vocals and Vil who does everything else on the recording), they also have a guest on keyboards while trying to settle on a few others for live shows. It is more than just scary when you realize just how good these guys are... and the addition of the others just makes them what I have coined 'sonically lethal'.

I rated GraVil very high for all of the right reasons... GraVil deserves every last one of those points. Raise the horns, the metal army's elite just has gotten a new commander in chief coming into the picture... and their out to make you believe and make you throw that salute.