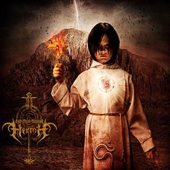 Type:
Release Date: 2008
Label: Mystic Production
Genre: Black, Symphonic
1 Hairesis
2 Instrumentum Diaboli
3 Eyes Of The Blind Lamb
4 Lord Shall Be Revealed
5 I Bring You Fear
6 Sin Is The Law
7 Gnosis
8 Who Can Be Against Us
9 In My Flesh I See God

Hermh is a group hailing from northeastern Poland, and apparently they have had a full career since '93. I have not heard of them. However, based on what I am hearing on "Cold+Blood+Messiah", their 6th full-length album, Hermh fits nicely and comfortably within the confines of the 'Symphonic Black Metal' genre. The style is rather self-explanatory, so I will not waste any time breaking this down.

The one stand-out feature that distinguishes Hermh from the others is the male chant and chant-like choir singing, which lends an "orthodox" feeling and undoubtedly, a heightened sense of grandeur. Hermh is certainly not skimpy with the "symphonic" aspect as there is plenty of depth created by the genre-specific elements. The music is well organized and the playing is clean and precise, save for the lagged blasting on track 2 that really disturbed and confused me since everything else is so perfect. Though the musical tone is specifically 'Symphonic Black Metal', I did hear traces of other metal styles infiltrating their sound. Track 7 was a nice acoustic bit that demonstrates this non-conforming "tone". Though I understand bold melody and grandiosity are features of this style, I still began to feel towards the middle of the album that the riffs were a bit too "easy" to comprehend. I most enjoyed the restriction of the chant "melodies". To me, these were the most successful points of the album.

"Cold+Blood+Messiah" comes complete with a DVD that features the making of the album, interviews with all the band members, videoclips and behind-the-scenes of the upcoming music video. The "ideological" agenda behind this album is briefly explained by a calm and well-spoken frontman, which tells me that this band is beyond blasphemy for the sake of blasphemy. It was quite nice to see genuine humility in all the band members of a Symphonic Black Metal band, and mildly delightful to watch the scenes of them compliantly getting their makeup done. The trailer of the video would be described as "awesome" by many, like a slightly glamorized version of a horror movie that takes place during the Old Testament. This is a great package for fans of Symphonic Black Metal.