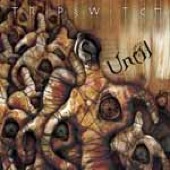 Hailing from the rural areas of England, Tripswitch is a Nu-Metal band that is trying to make a firm mark on the music scene both in their home country and abroad.

Filled with enthusiasm, great amounts of anger, overflowing sonic aggression and using some dance sampling to accent it all... Tripswitch really tries to make their music leap off of the disk and into our head... but it seems to just fall short. It seems like they want to play something differently than what they were recording at the time, and that brings that sense of being unorganized. It is a sense that these five guys wanted to go more... what's the word... Metal!

Reminding me musically of System Of A Down, they try to stake their claim to the Nu-Metal world to the best of their abilities. The do have what appears to be a great amount of talent, but that was why I was sort of let down by the averageness of their material. Are they following a trend or something to make money instead of following their creativity? I am not sure if they are or not, but sure seems to me like they are.

It really seems like they are searching the metal landscape for their as yet unknown little niche in the heavy jungles. Don't get me wrong though...they have promise, they have some massive potential as well.... but they need to find their own sound and heaviness, rather than sounding like so many others. I really think that they will do just that at some point... and plant the Tripswitch flag in the sand when they do.