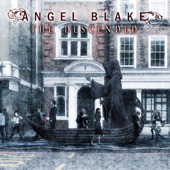 Old school metal meets a little of the new school of heaviness. Yeah, this is the real stuff here, heavy, smart and melodic. If talent was akin to being an atomic bomb, this would make the ones dropped in 1945 look like a water balloon being dropped off a very low roof when it comes to the band Angel Blake.

I was excited to see what this band was all about... after hearing a smattering of things through the metal grapevine over the last while. I never actually heard their debut album out on Metal Blade Records. Today, people said that this new album was so incredibly amazing of a release coming out... and they were right on the money here. They delivered ten tracks of straight ahead and in your face metal that is exactly the epitome of what metal truly is.

They are tight as any band I have heard, musicianship that is over and above about 90% of the bands out there, giving you something to really admire. The guitars are more that just simply great as Marko Tevonen and Anders Edlund duel attack you with great hooks that are heavy as they are catchy. Add in the use of a contra bass by Orjan Wressel and the no nonsense drumming of Janne Saarenpaa who packs it full of unique yet almost fiercely menacing sort of sound. Round it off with the old school metal vocals of Tobias Janssen (One of the elite but highly underrated vocalists ever, originally with The Law)and that changes this band into a force that is clearly unstoppable.

Songs like 'Again' and 'When The Lights Go Out' are so brilliantly made that they could become almost instant classics. The title track stands out the most as the clear cut winning song on the whole thing. No wonder that the song is also ended up being used as the albums name as well.

This album shows clearly that old school and newer school both can not only live together, but meld into a beast that clearly has one name to it... Angel Blake. Listen to it, love it and pass it on. I listened to it, I really loved it and I passed it on by telling all of you!!