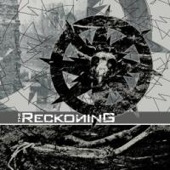 Ah... Belgian metal, some of my favourite albums have come out of this small nation's obsession for heaviness and brutality in music. With that said... Belgian metal is just like a two sided sword. It is either cutting edge good and cuts into you with the slightest beat, or it just dulled and very lifeless music begging for to be put out of its misery. Which will it be for The Reckoning?

First off, this band have been around since 1993 (Originally named Infernal Legion) and they have had two demos, a full album and a mini album under this moniker. From what I remember of them, they were raw and quite brutal Black Metal. Now as they are called The Reckoning (with one LP under the name already) they seemed to have evolved into a tight melodic mixture of Black, Death and Thrash Metal that is leaps and bounds past their original sounds.

Simply put... this outfit (Three regular members, one guest bassist, they have found a new bassist now.) blasts out some of the most furious and demonically angry music. The blast away with great speed, but they show that there is great amounts of melody to go with it. Their riffs can be almost described as being catchy... because they are memorable as they are brutal.

Lyrics are growled out with the acridness of sulphuric acid, honed to a sharp perfection that spews darkness and the grotesque indignance toward pitiful human life. The song lyrics are short, but man they are massively good with what they use. Songs like 'Heap Of Wretchedness' and 'Hellkind' show both utter heaviness and speed that is matched up perfectly with this great sense of pure musicality as well.

The Reckoning are a force that is hard to ignore, yet they do not establish anything close to new here for the Black Metal world ... but they do create amazing metal that suits them. All of what is on the album seems points out the fact that they are evolving into a great band all on their own... and that is more than enough for me to enjoy them.