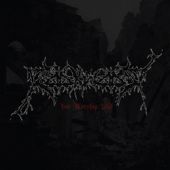 Obsidian Records has done it again. They have found an amazing band that will... nay, must go far! This is a find for the record company (Rookwood had been shelved for awhile, as it had been a solo project for someone calling him self Bakoul), and now Obsidian have the smarts to put it out and show what metal really is.

Rookwood is a Black Metal band from Australia, that manically adds in touches of Thrash into their mix to making already raw and very blunt music even more outstanding. They take Black Metal, throw away almost every last vestige of Norwegian influences that seem to be everywhere in Black Metal and then mix the rest of it with raw thrashiness that is deliciously crass. They show that you can do amazing things, on your own.

The man known as Bakoul (The main man) seems to want to have some mystery to him, so information about him and this band here is basically sketchy at best. I guess whoever he is, was trying to do the 70's KISS thing where he needs to be hidden behind the unknown... just like KISS had been with their make-up for so long. I hope that he does like KISS, and just come in from the shadows to accept that this is great Metal.

All that I know the music, and that is more than just pretty damned good... it slays! Songs like 'Black Is The New White' and 'F***ing Below The Flag' are both brutal yet smartly written. I loved it all. "You Worship Shit" is a great album, the whole hide-my-past thing is just colour added in.. That cane be ignored, the music thankfully can't!