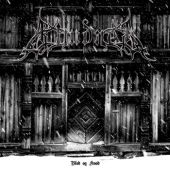 Seriously heavy and over the top bombastic blackened metal, this is exactly what Eljudner offers up. There is no mistake here, they just pound out some rather good early Norwegian styled Black Metal that assaults your every sense and takes you down every chance they get.

They deliver their songs with the angry fury of a demon scorned out of a soul, and someone had to pay for it.... but there is only one problem with the disk. I had received a digitally re-recorded version of their 7 inch record for the purpose of reviewing... that means that it had only two songs on it (totalling a little over nine minutes of music). It started to wet my appetite, but never did it even come close to vanquishing the hunger that it had started in the first place.

The fact that it was all done in a different language than my native tongue made it still good, but with giving only TWO songs... was a complete let down. What was there though, was more than just impressive and was deviously heavy and so chillingly brutal in its own right... but the limited number of songs given to me was not enough to make any sort of a proper objective opinion in the end.

I need to be fair here to Eljudner, and make sure that they do get all of the credit they have earned even with the two songs presented to me... I reserve the right to beg for more songs to be recorded and released in a very timely fashion. I hope that they make it happen... and rather quickly.