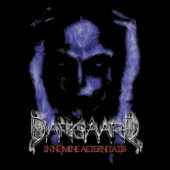 I had no idea what Napalm records had in store for us with this band. As it turns out, the Austrian duo Dargaard are one of those "bands" that only consist of one or two members who just play around with synths in the studio, like Summoning or Ice Ages, both also on Napalm. I actually really like this type of metal, being a big fan of the two aforementioned bands, so I was delighted with Dargaard. A talented music composer, Tharen, (he’s from Austria, home of classical musicians!) and a minstrel with one of the most beautiful female voices in metal deliver a record that is as magnificent as it is unique in an age of mimicry.

Synths of all types of instruments from the harp to eerie church bells create strange songs that supposedly follow no order. They all have slightly similar patterns but all of them are so contrasted in the base instruments that they seem completely different.

The first song took me off guard and totally blew me away, "damn, this album is gonna rule!" I said and gladly found a nice place to relax, and fully focus on the godly opus that was to come. But no, of course, I was let down. While "Dark Horizons" had it all ("The Infinite" is an awesome track too), I was soon to find out that the rest of the songs were a more tame and lifeless breed. And here come the dreaded words... I was bored!! Not too much, actually, but the songs -are - quite repetitive, you really have to be in a somber and relaxed mood to enjoy them. And of the 11 tracks, I would consider only 7 actual songs, since the rest are short fillers.

To focus on the good things, and there are more of them, Dargaard’s music is absolutely spellbinding. I hope that didn’t sound pretentious after all the bringdowns, but I’m totally serious. This album has some of the most beautiful music I’ve ever heard. Strange synths enchanted by Elisabeth Toriser’s angelic voice form songs that have the magnitude of the most majestic, passionate hymns. A song like "The Infinite" is completely timeless and rivals the finest musical compositions in the sheer emotion and feeling. Absolutely amazing songs here and there (the title track is great too) but doesn’t work that well as an entire album since the weaker songs lack emotion and somewhat reveal Dargaard’s writing formula, thus undermining the respect you originally held for the truly good songs.

Bottom Line: Beautiful and timeless hymns but by far not enough good songs to make this a masterpiece. Probably the best synth-based album I’ve ever heard.