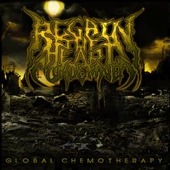 Hailing from the dirty streets of New York City, comes a extreme Death Metal band that is as antagonistic as where they had came from. RTHC come across as so brutal that they seem almost inhuman as they pound their music into your very psyche and bypassing all of your senses.

They are so amazingly heavy and by far one of those sort of bands that truly subscribe to the mind set of having total mastery in their music... but on the flipside of the coin, RTHC do have some very decidedly glaring faults that end up weakening the first impression you get with them.

The music, although amazing at first, does not really go anywhere. They seem to get stuck in loop of tempos and just stays there without trying very hard to get out of the rut they have dug all by themselves. Tempo wise, you cant really tell where one song ends and another one starts because of the likeness between them all. It is odd, considering that anyone with a brain can hear the amount of talent these guys have.

How this album was recorded in the first place shows that the person who did it knew what he was doing... making the term stellar seem pretty much too weak. It boosts the music up ten fold, but even that cannot save the album in the end. RTHC sputters and wavers, yet there is a sense that there is better things to come, but not on this disk. For all of the guttural screaming and heavy guitars that is laced onto this CD, it ends up feeling more like a garbled whimper than a great album.

Musicianship: 7
Atmosphere: 6
Production: 10 (how it was recorded is incredible)
Originality: 6
Overall: 6