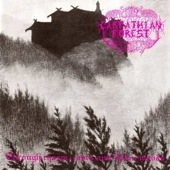 No doubt, the name Carpathian Forest was and still is pretty original for a Norwegian black metal band. The music on Through Chasms, Caves and Titan Woods does not reach the same level of originality, but it reflects the early days of the epicenter of the second wave of black metal. The booklet speaks of "black symphonic laments and hymns" and I think this is an appropriate description. The typical - and very good - artwork also indicates that Carpathian Forest shared the spirit of bands such as Ancient or Gehenna and "The Eclipse / The Raven" shows the mostly well-hidden fragile side of black metal. I don't think that this calm, atmospheric piece with its whispered vocals really enriches the EP, but it shows the courage of the band. Raven cries and keyboards accompany a soft guitar and maybe a short version of this track would have been a good intro, but I don't see it as a regular number.

Three of the four further songs mirror a group in its infancy. Outstanding riffs, overwhelming misanthropy or memorable parts do not show up. Some riffs originate from the Tom Warrior school and even an "Ugh" is not missing. But that's not enough to conquer a grumpy listener like me… In addition, the atmospheric keyboards are pretty lame and make me think of "For All Tid", the mediocre debut of a band that meanwhile has found its comfortable place in the big area of meaninglessness. The most interesting track finishes the EP. "Journey Through the Cold Moors of Svarttjern" is a solemn, cold and desperate number that spits on obvious aggression. This song cannot be compared with the rumbling tunes on the first, second and fourth position. This trio sounds neither radical nor exciting and it fails to leave a lasting impression. Although Nordavind, Nattefrost and their session musicians provide an unexpected break every now and then, the songs cannot fully convince.

Finally, the production lacks mightiness and force. Of course, this was a debut and I also understand that primal Norwegian black metal rather demands a "natural" than a flawless sound. Nevertheless, this kind of production is one of the reasons why this EP failed to enter my private hall of fame. I miss the expression of total hate, even though I admit that one can call this sound misanthropic. Be that as it may, Through Chasms, Caves and Titan Woods is damned to gather dust on my shelf. It is not amateurish or embarrassing and it does not lack authenticity, but its songs and the production are just too weak to justify a higher rating - at least in my humble opinion.