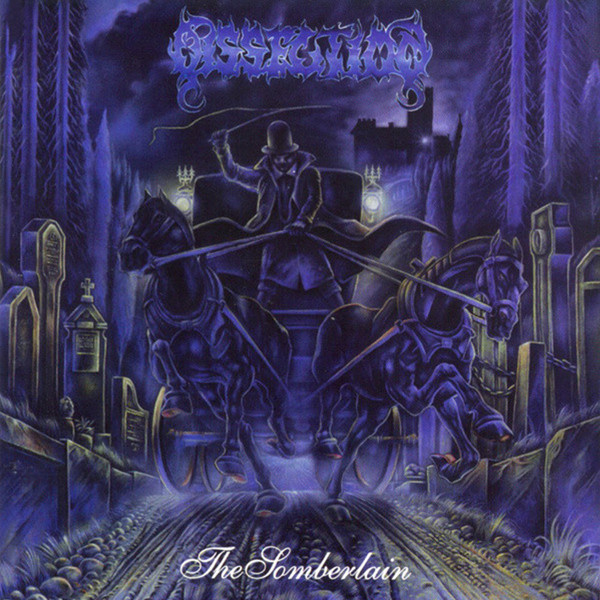 No doubt, the world has seen a lot of sick minds - and Jon Nödtveidt belonged to the prime examples of this species. Usually, I put a "R.I.P." behind the name of a dead musician, but I am not quite sure whether Nödtveidt ever wanted to rest in peace. Guess he was just seeking another cosmos where he could bring his entire destructive energy to life. I do not know exactly whether he has found this place, but I am sure that his music is still relevant for legions of metal fans and, even more remarkable, thousands of genre musicians. Dissection have left a highly influential legacy which consists of two parts, The Somberlain and Storm of the Light's Bane. The rest is not worth mentioning, at least from my point of view. Therefore, I am happy that this review deals with the debut of the Swedish legend.

Honestly, I am not totally convinced of The Somberlain. It is no perfect album. Nevertheless, it holds some more or less perfect songs. The epic double strike at the beginning boasts with ingenious designs, fantastic sections full of fury, great melodies and a massive dose of flawlessly integrated breaks and tempo changes. The falsetto of King Quartz is missing, but the atmosphere of the songs matches the artwork which lies in close proximity to that of "Abigail". "Hey coachman, which road do you take?" - "Dear guest, this route will lead us directly into everlasting perdition." - "Thanks a lot, I just wanted to know it."

But neither "Black Horizons" nor the title track marks the absolute climax. Well-hidden on the eighth position, "In the Cold Winds of Nowhere" sends shivers down my spine and a layer of ice covers my skin immediately. Immortal have written some great and icy tracks, but even if Demonaz stays overnight in his top performance fridge, he will not achieve the level of coldness that these winds create. By far not. The main riffing seems to be the melting pot of all Dissection-compatible feelings. It expresses stress, desperation, mercilessness and negativity in abundance. Furthermore, it illustrates the murderously effective guitar sound of the album and the speedy instrumental part adds a strict and straight component to the song. Although this classic is more compact than its big brothers at the beginning of the running order, it evokes the same massive amount of emotions and becomes a blessing and a curse at the same time. The remaining tracks stand in its shadow. And I am talking about the regular tracks, not about the pretty useless instrumental, acoustic guitar intermezzos.

The regular songs show really good facets of pretty melodic death / black metal, but they fail to score with ingenious elements. The tempo changes work and give the whole album a dynamic touch. Nobody can deny that the young Nödtveidt and his co-authors had admirable compositional skills. Therefore, the guitars create interesting, atmospheric riffs in abundance, but the somewhat complicated songs lack accessibility, at least to a certain degree. In comparison with its successor, it gets clear that Dissection had (minimal) difficulties to come directly to the point at this stage of their career. I do not ask for less complex song structures, but Storm of the Light's Bane shines with a higher effectiveness. Anyway, in order to bring this review to a correct end, I must say that the well, but not superb produced The Somberlain is a really strong album and its impact is still being felt. You say I am too critical? Well, maybe I also belong to the sick minds I have mentioned in the first paragraph.

Yes, Dissection were always different. Credited as having as much impact on the Norwegian black metal scene as Emperor or Mayhem, yet hailing from Sweden, the Dissection debut is one of the best I’ve ever heard.

Jon Nodtveidt and the boys show true talent for writing long, progressive and melodic songs that sound thoroughly "evil". That’s the only word I can use to describe it. The intro to "The Grief Prophecy..." is simply the most "evil" music I’ve ever heard. Beautiful in a dark way. There’s the “evil” melody and then there’s the sad, beautiful type, like "The Somberlain" intro or the ending to "A Land Forlorn". Absolute beauty, no words can describe it.

Though the guys certainly have -tons- of talent and inspiration, the same can’t be said for their budget. The drum snare sounds like a hollow metal can, which really kills the evil and sinister mood they’re trying to create and the playing isn’t very tight either. It sounds like it was recorded in some small garage, which, I suppose might actually do -more- for the evil mood, but not for me. They could have made this album much better if they’d spend more time in the studio and had better production, but true talent can’t be hidden by lousy recording.

It’s very hard to brand Dissection. It’s "Swedish death metal" to those who are familiar with the similar "Gothenburg" sound of bands like At the Gates and the like, but Dissection have been influenced too much by Norwegian black metal to be called "death". Jon’s previous band, "The Black", is pure black metal and the vocals here are also the traditional rasp. It matters little anyway, I call them "Swedish black metal", "Swedish" for melodic, since all the masters of melody hail from this country; At the Gates; In Flames; Opeth...

Bottom Line: A must for any fan of black, death, or melodic metal. Phenomenal debut!