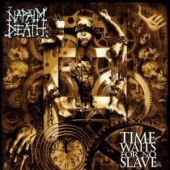 It's sad to say that the grindcore days are over. But at least Napalm Death is still making music, even though it's totally different than what they began as. Time Waits For No Slave is a good illustration where they're coming 2 genres, death metal and some grind. It's odd because I was so used to the Mick Harris blast beats from the 6 years that he was with the band. But Danny is an OK replacement. This album is heavy, but the tempo changes are evident and totally there, but the blasting is limited. The production quality is a little raw, but OK. I liked the whole album. I thought that at least for death metal fans, this is a good one.

The guitars aren't riffing too fast. That intensity is gone, but at least the music sounds good. It's a shame that they lost Jesse. I think he was a big influence on the band being that he was with Terrorizer in the early days. I guess when Mick left the band, that was the end of the real extreme days. I felt that he was the best grindcore drum in existence. Danny is good especially on here. It seems as though he's matured behind the set and is more comfortable with being alongside this band. It's amazing that they've been around since 1981. I was 5 when they formed! Anyway, it's difficult to pinpoint specific highlights on here, just that some tracks are fast then they completely chill out.

I like the variety on this release, it can get really intense. Their newer stuff is LOUD. Meaning their latest release. This album is one of their longer releases, it clocks in at about 50+ minutes. It's worth listening to, but it just takes some getting used to. If you're expecting Napalm Death of the old, it's sad but they're not really doing it. This release I'd say in the death metal genre is solid. I actually decided to order the CD. I know that this album is outdated and they're working on new material. I just thought that I'd write about it anyway. Even if it is an older Napalm Death release.

Saying farewell to Jesse and the departed members of the earlier Napalm. It's a good lineup still and there literally are no leads on this album. It's just all rhythms which is why I like the album. Jesse was more solid in the lead department, but Mitch has constructed some pretty good riffs. They're diverse and that's what makes the album interesting to listen to. I know earlier it sounded as though I wanted old ND back but that just isn't going to happen. What they evolved to is something totally different. A lot of their albums post-Mick are strictly death metal except Utopia Banished. But that one wasn't very good in my opinion.