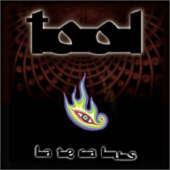 After many years of legal battles and friction between the band and their label, they return with their third album, “Lateralus”. Doing what they do best, the band has continued to progress from their last album, “Ænima”. Clocking in at over seventy minutes, “Lateralus” is an excellent and rewarding album.

Opening with ‘The Grudge’, you know that you’re still in Tool’s territory and they aren’t going to let you down. More complex and progressive than before, the band will give you more elements than you can handle on an initial listen, which is good. Many listens will prove to be captivating instead of boring and monotonous.

Five years certainly did leave the band time to grow as musicians and people. Maynard James Keenan is pushing himself to new extremes, conveying much more mature and confident emotions, alternating between vocal styles, and having a much stronger sense of dynamics. Adam Jones continues to share with us his distinctive ideas, taste, and sound, while interacting with bassist Justin Chancellor. Justin has stretched his imagination to come up with unique and pleasing ideas, and playing with a new level of self-assurance than before. Drummer Danny Carey has come up with much more complex, better written, and all around great rhythms for this album. Probably the member who improved the most, Danny’s drumming on this album is nothing less than phenomenal. All the members have grown considerably and it’s very evident on here.

The album is filled with many great pieces. With over seventy minutes of material, one would hope that the album keeps the listener enticed. The problem is solved due to the bands interesting choice of moods. Whether it’s the softer ‘Schism’ or ‘The Patient’, the intense ‘Ticks & Leeches’, the nicely written interludes, or the creepy closing, “Lateralus” is a well-written and well-structured album.

Bottom Line: The most mature the band has ever been. If you’ve enjoyed Tool in the past, this is definitely something you should check out. A great return for the kings of progressive hard rock!

If stating that this album is inaccessible means that you really need to listen to Lateralus a good five times to realize that it should win a nobel prize, then say away.

As has become a dependable virtue of Tool, the music of that which is Lateralus is so well layered and complex yet somehow tastefully simple. In being as such, it is a direct pointer to the duality of that which is Tool. In an exampling effort that could do no true justice to the value of that duality, I start with the most unearthly voice of Maynard James Keenan; a softness worthy of the kindest lullabies that can backlash into a wall of intensity sporting the ferocity of an enraged Yeti. Secondly, but by no means lesser, the profoundly confident skills of bassist Justin Chancellor, drummer Danny Carey, and guitarist Adam Jones produce a genius intensity that is often fused with beautifully competent psychedelia. This sound can present itself in a gentle rolling wisp that, while conceptually seems female, oozes a perpetual threat of testosterone unleashed... which is delivered uninhibited.

It's been five years since the release of the preceding masterpiece Ænima. During that time Tool fans could only satiate their thirsts by going to every show, scouring the net for news and just waiting until the foreplay began with A Perfect Circle and soon after, the live track and video collection of Salival. This album has been a long time coming and it does not disappoint with massive sounds structured from haunting emotion.

From the softer side of the entrancing and powerful tracks like The Patient and Schism to the crowning achievements of perfect intensity like Parabola, Ticks & Leeches and Lateralis, track in and out, including the panicked alien conspiracy message, Faaip De Oiad, taken from Art Bell's paranormal/conspiracy radio show, Lateralus is downright astonishing. The Led Zeppelin of our time has orchestrated an ageless magnum opus follow-up to Ænima that licks the boundary of godliness. Ok, I'm gushing and I need to shut the hell up.

The attention to detail is so thorough that this album leaves you thirsting nothing. Every listening saturates and satiates. Even the bloody sleeve and case is one of the coolest packaging jobs I've ever seen!

Bottom Line: Every minute that goes by that you do not have this album, you are hurting yourself... severely. Stop being a ninny and purchase this disc!