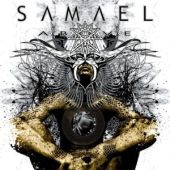 Above was announced as a very heavy album and that's only logical, firstly in view of its musical content and secondly due to the fact that nobody is well advised to announce a weak album. But that's exactly what it is. Generally speaking, I like bands that prefer to get more brutal instead of choosing the well-trodden path that leads slowly but steadily into artistic meaninglessness (and not to commercial success). Too bad that here we have a very special case. Samael's line-up consists of very talented musicians and they have shown many times their ability to write pretty smooth, very elegant tunes which do not lack heaviness and depth. But already the opener "Under One Flag" starts with run-of -mill black metal leads. The track just rushes by and nobody knows why exactly this faceless and, even worse, emotionless and somehow non-authentic track was chosen for the first position.

The Swiss authority has obviously lost its compass and instinct at the same time. Yes, there are some decent numbers like "Polygames". Crazy enough, its first sequence seems to be stolen from the archives of Impaled Nazarene, before the number calms down and surprises with an almost meditative approach. But it must be mentioned that the noisy overall appearance of the album stands in sharp contrast with the rather reflective and intellectual image of the combo. Thus, it comes as no surprise that a lack of conviction shimmers through many songs.

It's a cruel experience to see how many things go wrong on Above, although it cannot be doubted that Samael have much more potential than thousands of their competitors. The non-organic sound is annoying, the constantly raw vocals lack both expressive power and variety. The vast majority of the single tunes fails to develop their own identity. I am listening to an electronic mishmash which becomes more and more annoying the longer the album lasts. I actually feel the need to ask: Samael, how could this happen? - But I fear they do not see the need to answer me, therefore I reject this question. Either way, atmosphere is nearly completely missing, and I have absolutely no clue why nobody realized at least some of these defects. But maybe the defect is on my side. The ratings of the previous (appreciated!) reviewers of "Below", excuse me, Above indicate that.

Nevertheless, these are the many things I do not like on Above and the synthetic melodies, the pompous keyboard carpets or the shitty synthesizer solo in "Black Hole “are just two of them. I did not expect a second Ceremony of Opposites, but a better understanding of the protagonists how to deal with electronic harshness. Songs like "Polygames", "Dark Side" and, to a lesser degree, "Virtual War" prevent a complete catastrophe; nevertheless, the main purpose of this album is to gather dust in my shelf. Above, no doubt at all, is a pretty heavy work, but to my big surprise, I found out that heaviness and quality have different meanings.