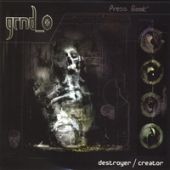 Type:
Release Date: 2008
Label: 279 Productions
Genre: Death
1 Behold The Last Age
2 Cold Logic
3 The Right In The Wrong Order
4 Into The Realm Of Consequence
5 A New Age Of Misery
6 Where Giants Fall
7 The Unstoppable March Of Time
8 Pseudo-optimistic Intentions
9 A Universe Of Shadows
10 Cloud Of Unknowing
11 Doors Of No Return
12 Monolith

Apocalyptic Death Metal coming in from Greece! Grnd_0’s debut album "Destroyer/Creator" was not a complete waste of my time. There are actually quite a few enjoyable moments throughout this album. The big issue though, was that none of those moments lasted just long enough. This trio gives listeners a blend of mainly Death Metal with Black, Thrash, Doom, and Heavy Metal on top of that.
I’ll start with the good news; these guys have some awesome riff writing going on, and sweet solos. I did catch myself nodding along at some points throughout the album, particularly for ‘Where Giants Fall’ Unfortunately, golden moments that cause such a stir in one’s self were quickly bulldozed over with a cacophony of synth and blast beats. This was an issue in almost every track. Grnd_0’s song structures are often a game of ping-pong between blast beats with at least three other layers of sound and slower black/doom riffs. A bridge really needs to be built here between one lest the listener drown in confusion.
Like overdoing it at the Ruby Tuesday salad bar, Grnd_0 is trying too much at one time. Lay off the bacon bits guys, and you’ll have something more appetizing next time around.