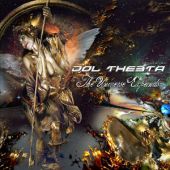 Type: Full-Length
Release Date: 2008
Label: Electronic Art Metal
Genre: Electronic, Progressive, Symphonic
1 Which Are You
2 Silver Air
3 Nighttime
4 Mud
5 In The Forest I Found
6 Something Called Tomorrow
7 Afterlife Crescendo
8 Every Goodbye
9 Goddess
10 And Through A Dream
11 The Universe Expands

I should preface this review with a warning: If you do not possess an open mind, do not bother. Sure I could add exceptions, but those without the open mindedness to take in this CD are not worthy of partaking in the journey.

Dol Theeta hails from Greece with their particular brand of experimental music worlds. Begining with sampling explaining light hypnosis with backwards tracking of whispering creating a ghostly portal to flow through. From the second track on you are treated to some simply stunning synthscapes, and were that all I probably would be reviewing this elsewhere. Through patience one finds themselves floating in and out amongst frequencies and vibrations, only to be pummeled by guitar, vocal, and drum treatments abound. This guitar is carried with a moderate mix,and one would expect a very industrial take, this would not be a bad assumption, except for the guitars do not land flat without character. Bends and harmonics add personality to the rythms, and the leads are well thought out and executed. The vocals on the other hand are a completely different matter. Operatic soprano Kortessa really outdoes her role, with full harmonies left and right. Very soothing and well done, this is one of the few times I think they fit more as an instrument than plain vocals.

To completely dispel what may also be lurking in your mind at this point of the drums, becuz the drums are so organic and on point.
The drums move very naturally and alive with groove and hook to provide another bit of diversion from the synths that JUST DONT STOP........When a track ends, I am left anxious as to what could possibly be next. Thus would be the point here, with a universe that continues to expand on and on. If one were to have to try to compare this to anyone I am afraid the closest I could come in genre bending would be Arcturus' last album, or some of the later Ulver material. If I start doing that though, I would have to recommend also to fans of Coil, and early Current 93. So lets not go there and move on to the issues at hand.

I am simply amazed at how full this disc sounds, this is so well composed for the movements in which they wish to travel. Dol Theeta truly are doing unique things, blurring the lines between many genre's too vast to name, and doing so extremely tastefully. It would probably also be wise to point out their attention to quality and detail, as so many bands get bogged down with such details and lose focus of the vision originally sighted. Even their artwork suggests a good bit of thought as to what to use, and what a wonderful visual representation in vivid color adourning not only my promo sleeve here - but well secured artwork as well printed on the CD - what use of space!!!!!!!!! I do so wish them as they continue on their journey treading some new otherworldly paths with their next release.

To leave you without giving a suggested manner of listening would be a sin. Dim the lights, prepare a calming relaxing concoction and grab your nicestm headphones. Lie back on your couch, close your eyes and get drowned.........