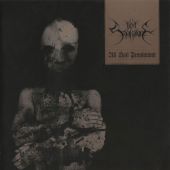 Getting an anvil straight to your forehead at 100mph... that is exactly what the Norwegian black metallers Den Saakaldte does. Brutal, demonically deranged and plainly uncompromising, they are your most vial nightmare.

The title of the album, "All Hail Pessimism", has been explained as being a tongue in cheek naming of the disk by the band themselves, but in all honesty there is nothing in Den Saakaldte's music that could be construed as being tongue in cheek. They are at the basic level, a Christian's worst nightmare... to the tenth power.

Extended drum blasts carry the band along, while the ferocity of guitars and bass create a rolling rumble that cold only be explained as they were coming up straight from the bowels of Hades. The vocals are some of the most evil and Satan-fuelled I have ever came across. They may be singing in the Norwegian language, but you cannot ever mistake what the blackened message they are holding up really is.

"All Hail Pessimism" is a hell fire hymns set down for all who despise the white light of modern Christianity, and for those who simply find the left hand path for themselves. It is true that these guys are some of the finest of black metallers I have found coming form a country that has always set the standard for BM through out the world... But it just shows that the movement is not dead yet. Norway has in fact has started to better itself, and starting by unleashing such darkened metallic fury as Den Saakaldte.
Truly, this is a fine moment indeed, all hail the darkness.