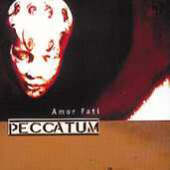 Welcome to the third release from the avant-garde style metal side project from the lead singer/guitarist from Norweigen Black Metal gods Emperor. For those not familiar with Ishahn’s Peccatum it can only be described as a cathartic mix of black metal, death metal, gothic metal and classical music, Peccatum is an extremely interesting project indeed. Instantly, just from looking at the CD sleeve you know that this is going to be very different from anything Ishahn has been involved with before. Joined by his partners in crime Lord PZ (Source Of Tide) and female singer and keyboard player Ihriel they set about creating the complicated and at times twisted vision that is Peccatum.

Upon the first listen of this CD, I really had no idea what to think. Was it metal? Was it classical? Was it just complete chaos?, but after a few more listens I decided that it was none of those, rather a brilliant and quite unique concept. The first thing that strikes you about this album is it’s complexity. Peccatum have the unique ability to move in and out of many different musical styles within the same song, while still somewhat chaotically maintaining direction. The dynamics are out of this world, one second you are hearing subtle and at times quite bizarre classical string pieces accompanied by operatic style vocals (most of you will be aware of Ishahn’s ability in this field), then with no warning at all you’re hit with a wall of guitars and double-kick and the familiar sound of hissing black metal-like screams. If it wasn’t for the obviously talented members, realistically this concept should not work. But their superior musicianship shines with this release.
Fans of Emperor do not despair as a good portion of this album is good old fashioned head banging metal. But it’s the combination of the afore mentioned genre’s that sets this band apart. Ihriel’s voice is unbelievable, dark and mysterious but with an incredible range displaying all the traits of a well trained classical singer. The production is excellent, I don’t think I need to go into detail as we all know the recording standards of current Emperor and this album is of the same pedigree. There are some fantastic classical and heavy sections, but I found that the movements between the two were at times too sudden and left the listener a little confused as to where the song is moving. I look forward seeing what direction Peccatum take next as they are exploring a very interesting format with ‘Amor Fati’

Favourite Tracks? Probably the opener ‘One play. No script’ and the ever changing ‘A game divine?’

Bottom Line: A excellent, original and very dark concept, a tad chaotic but definitely one for the collection.