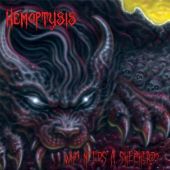 Type:
Release Date: 2008
Label: Self Released
Genre: Death, Thrash
1 Shadow Of Death
2 Who Needs A Shepherd?
3 And The World Dies
4 All For You
5 A Traitor

Mixing a variety of metal genres all at once... Thrash, Death, and even consolidating it all with more than a smattering of old school... Hemoptysis jumps out and is right there in your face and seems to be making a style unique to them. Their name means coughing up blood in medical speak... after hearing the most brutal of metal outings in awhile... I think it really has drawn some blood.

"Who needs a Shepherd?" is by far the truest form of the metal spirit I have come across in many years... It takes every lessons from bands in the past and then they add in some unique and interesting ideas that are totally theirs. It is not too far away from the music that drives us all daily because it is as metal as you can get - no matter how you slice it... Hemoptysis just seems like they have gotten something that is truly individual here.

For a four member band, (and seemingly very young as well) these guys really do know how to Thrash hard. They blaze along as Masaki Murashita (Vocals/guitar) and Jack Flieger (Lead guitar) do attacks that are pinpoint and brutal while the rhythm end made up by bassist Sunao Arai and drummer Travis Thune keep the attack happening like a school of hungry sharks. They are as fresh as newly fallen snow with their approach, but they are as powerful as any Category five hurricane can be as well.

The band explodes outwardly from the first track called 'Shadow Of Death' and does not look back. They hack and slash at you with sonic power but excite your mind as they show that their music is much more than metallic explosion... but a mentally and spiritually exciting trip into the metal abyss.

I would suggest that you pick up the album as soon as possible... then you will see just where my praises are coming from. If you don't get this album, I might have to question your sanity.