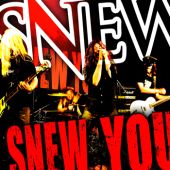 Taking every idea they have from the raucous down and dirty hair spray bands that had populated the world of music in the late 80's, Snew swaggers out and starts to strut around like a peacock on steroids laced with Viagra... the trouble is that the band are more like an anorexic dove instead.

Stealing ever one of their guitar licks and vocal line from a conglomerate of Rock legends like Guns'n'Roses, Faster Pussycat and even bad-assed Motley Crue... that starts to really tells you right off about them. Snew never once hides that they are pilfering every single idea they have written and recorded, and they seem to be proud of the fact. I love that new bands are exploring Heavy Metal and Hard Rock from the past... by most are trying to steer away from the cartoonish ways of never once changing anything.

From the all too Crue inspired (and horribly copied) 'Stand Up High' to the Faster Pussycat rip off sound-alike song, 'She Is A Real Gunslinger', it just seemed that the riffs and everything I have heard many times before. Bass, vocals and everything else as well seem to have been done before. I am all for recycling as the next guy... but you have to make something a little more new with the old stuff. They just bypassed that step in the process entirely... and rehashed every lipstick wearing and spandex moment they could.

Damn... this is Deja-Vu to the tenth power, but it is in a really bad acid trip sort of way. It is just like the movie 'Groundhog Day', the more you hear it... the more irritating it gets.

Hair spray kills the ozone, Hair Metal nearly killed metal in the 80's... Snew simply makes that point even more clearly than anything anyone could have explained. When people copy stuff this badly... it is bound to kill the ozone anyways... the methane gas rising from it is a clue to that.