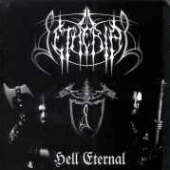 Buy on: Bandcamp
Type: Full-Length
Release Date: August 16th, 1999
Label: Napalm Records
Genre:
1 Towards The Realm
2 Shadows Of The Throne
3 Hell Eternal
4 The Aeschma Deava
5 The Sign Of Wrath Awaked
6 The Nightrealm
7 Guardians Of The Gates Of Flame
MetalBite on YouTube

Hell Eternal was released in 1999 and it seems as if Setherial wanted to end the 20th century with an appropriate apocalypse. The Great War is over? World War II ditto? That's not okay, the century needs an ending in fire. The aptly titled album shows that Sweden, currently the European country with the longest period of peace, has still a lot of martial energy under its surface.

Okay, the sheer vehemence of the material does not only blow the audience away, it is also at the expense of a differentiated production. A wall of sound forces the listeners back into their seats. On the one hand, I enjoy the uncompromising mentality and the pure blackness. On the other hand, the album lacks dynamic, because the noise level remains unchanged during the entire album, if I ignore a short section of the fourth thunderstorm.

The constantly raging Scandinavians did not forget to intersperse a minimum of melodies, but I am sure that I would not be able to distinguish the single songs on a concert. Hell Eternal does not suffer from monotony, because it never gets boring. Its brutality has a fascinating component. Nevertheless, this work offers more or less uniform compositions. It challenges albums such as "Vobiscum Satanas" and, no doubt, it has more muscles. But I am sorry, this does not mean that Hell Eternal wins the comparison. Sometimes less is more and Setherial have to face the fact that their tracks are less catchy and less variable. Indeed, this record hails from the most gruesome corner of hell, but it does not allow a brief look at any other location.

Be that as it may, there can be no doubt that Setherial have drunken from the blood-filled chalice of black metal. Tracks like "The Nightrealm" destroy everything that tries to resist. Extremely fast rhythms torture soul, mind and body and a greater distance to mainstream music is simply not imaginable. The sinister horde does not prefer conventional song structures and the dudes also spit on progressive patterns. They switch from hyperfast to ultra-hyperfast and back, that's it, but the compositions do also not lack substance. The fervent hatred of the musicians is mirrored by the seven spawns of evil in a very impressive way. Should I criticize that they just use the typical means, for example the throaty voice of the lead singer? I don't think so. Every sub-genre needs an identity which is based on some core elements and therefore I have absolutely no problem with the general approach of Setherial.

It remains a mystery why bands like Dark Funeral or Marduk stand in the first and formations like Setherial or Thy Primordial wait in the second row. A better promotion, a better distribution, a better image, all these things can be the crucial factor. But in terms of music, I see no big difference. Honest, untamable and violent: this is Hell Eternal. And I must add that it houses high quality black metal without exception. I can hardly wait to experience how the band will finish the 21st century, but I am sure that all will end in fire.

Razor sharp, lightning fast black metal more furious than anything I’ve ever heard save perhaps old Immortal. The CD doesn’t let up for one second, it’s amazing, absolute chaos, never gets stale and seems to keep a relatively safe distance from the dreadful realm of boredom, although unintentionally drifts there as well once in a while.

The drum set used here is absolutely massacred by Alastor Mysteriis (left, on the cover), furiously beaten and brutally pounded by his powerful, breakneck blast beats and the constant double bass drumming. I just don’t know how these modern black metal skinsmen do it, even with triggered bass drums this is fucking unbelievable, I wonder how many sets they went through to record the damn thing.

Tommy Tagtgren, Peter’s brother, handled the production here and a damn good job he did. Guitars are razor sharp and sound like a raging, turbulent, low-tuned chainsaw ripping up the riffs at breakneck pace, and here is where it gets a little monotonous. Sure there’s a fair bit of variety but after being so furiously pounded for some 10 minutes you kinda get disenthesized and it just doesn’t have as much an effect on you. But, I think the guys from Setherial figured that out too and after the fourth track things start to let up just a little, to give you what meager breathing room you can obtain. The double bass eases up a bit, thankfully for the drummers feet, and the guitars drop the furious shredding to just slowly hit a few distorted chords.

If you can survive the tumult you’ll sure as hell like this thing. If black metal fury is what you like then, for Satan’s sake get this right away! It’s not the cheap crap like Antaeus where it’s distorted beyond any recognition, this is clear, fast, furious, Satanic and downright brutal!! Plus the logo is one of the coolest I’ve ever seen, designed by Jens Ryden (Naglfar, Dead Silent Slumber).