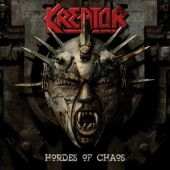 How many songs do we hear during our metal fan existence? 1.000 per year on average? And how many of them keep sticking in the mind? One percent? Two, three? The older I become, the less it gets. Thus, each and every song that enters our long-term memory can be considered as something special. Based on this premise, the opening title track of Hordes of Chaos is something special. I don’t know whether it gets the award for the best Kreator song of the 21st century, but it makes one thing pretty clear. 'Hordes of Chaos' (the tune) proves evidence that vehemence and catchiness are not mutually exclusive. Kreator, and unfortunately that’s no matter of course, avoid any form of polished cheesiness, but especially the chorus with its deeply digging “everyone against everyone” line develops an amazing long-term effect. The liaison of repetition and insanity, performed by Mille in top form, is mind-boggling. Kreator sound like a young entity in rage and this is the best a thrash formation can do, at least since the invention of the Araya’s scream in “Evil Has No Boundaries”.

The killer at the beginning of Kreator’s work from 2009 makes me forget the weak moments of the album. Don’t worry, there are only a few number of these moments, for example the slack first tones of 'Amok Run' (Mille’s vocals fail to do the calm sequence justice) or the useless intermezzo 'Corpses of Liberty' (is this a hidden homage to Janis Joplin, the thrash metal translation of her “freedom is just another word for nothing left to lose” creed?). Furthermore, non-musical components suck. The artwork is embarrassing and stereotyped, while the lyrics hammer in my head that I will never share Mille’s weltanschauung. However, the music makes up for this. In general, the dudes let steam off and they do it experienced yet energetic, technically precise yet (more or less) wild and traditionally thrashing yet fresh. The tailor-made and coherent compositions profit from a transparent, powerful sound that delivers metal, not plastic. Kreator fire some well-formed riffs into the crowd without falling victim to self-quotation. Only the beginning of the strong 'Escalation' reminds me of 'Nonconformist', but this is surely just a coincidence in view of the rather inconspicuous existence of this song from Outcast.

It feels good to experience that the machine-like precision of the band’s performance does not lead to a sterile overall picture. Especially the racy and aggressive 'War Curse', the dark 'Absolute Misanthropy' with its mix of furious and menacing sequences or Ventor’s flattening bass drums in the chorus of the constantly growing 'To the Afterborn' show that Kreator haven’t lost much of their former relevance. Naturally, the quartet has the typical handicap of a long-standing formation. In view of all these years they are already in business, the dudes are not able to recreate the wow effect of Pleasure to Kill or Flag of Hate. But it does not matter that both the song formula and the general direction of the band are more or less well known as long as a new album holds a couple of outstanding tracks and this is exactly the case here. Okay, with regard to the technical accuracy the title Hordes of Chaos might be misleading. But who cares about such details? Those of you who like to listen to non-chaotic, mature thrashers will join the "hordes" that already had a good time with this full-length.