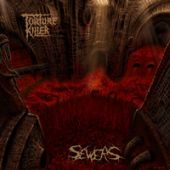 Type: Full-Length
Release Date: 2009
Label: Dynamic Arts Records
Genre: Death
1 Crypts
2 I Bathe In Their Blood
3 The Art Of Impalement
4 By Their Corpse
5 Coffins
6 Rats Can Sense The Murder
7 Scourging At The Pillar
8 Sewers

I try to have my ear to the ground when it comes to my obsession with metal so to speak. I am always looking for that one act that can elicit that sort of giddiness like I had when I heard Slayer’s "Hell Awaits" album so many moons ago. I look for that one band that will change the shape of metal, while never selling out or going with some flow. Is Finland’s Torture Killer going to be that band?

This band of five very intense musicians offers up some of the most impressive Death Metal I have crossed paths with. They blast you with heavy riffs, snarling and nasty vocals along with blinding speed that match up well with almost a catchiness that drags you into their pain and tortured world they have written. They seem to have found that balancing act between extreme and accessible, while never once selling out.

Just take a moment or two to listen to 'By Their Corpse' or get attacked by the savagely played 'Crypts'... I think you will see what I am talking about. This is like a universal convergence of speed, heaviness, strength and vile passions that have occurred -and that had made the outfit that is aptly named Torture Killer. They have taken the passion for bands like Obituary and Six Feet Under and have made this their music.

Yes, I am excited... so fucking excited. This is exactly like what Death Metal should be. I hope that they might take England’s GraVil on tour with them... and begin to take over the world one mosh pit at a time. This is almost the perfect Death Metal album, look at the rating and you will see where I am coming from.