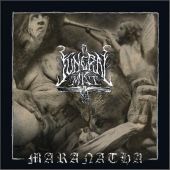 Maranatha is a point of inflection in the history of Funeral Mist. It's the first record featuring an Arioch consolidated in the scene as the frontman of the iconic Swede black metal act Marduk, so this time the collaborations are more luxurious: Devo on recording duties and Lars B. on drums. Six years passed since the release of the first full length from the project but the production concept is pretty much the same: crude, bright and trebly black metal with samples and occasional artificial studio ambiences and effects. The lo-fi concept is better coined in this record than on the previous one, overall the tracks have a thicker body, more bass and overall it sounds more neat, despite having the same raw artistic direction. Arioch's songwriting also benefited from his stance in Marduk, riffing is more memorable and meaningful and has an epic edge that revolutionized the project's sound.

I couldn't help but notice the inclusion of a slow polka drum beat, that gives another dimension to build songs over that wasn't present on the band's previous records. The drummer change was an upgrade, I have nothing against Necromorbus -who showed a big evolution from the demo to the EP- but Lars B. is way more complete as a drummer and Devo also made a better work recording and mixing this album than he did on Salvation. I don't have an opinion yet about the band's most recent output (2018’s Hekatomb) but it feels like this is Arioch’s magnus opus, both lyrical and musically. This album features his unique tragic sense of melody and the traditional belligerent hyper fast, raging blast beat parts, and the addition of that interesting mid paced and slow polka beat sections that were generally resolved with linear double bass drum feels before, enhancing the composition possibilities and variety of textures. You could say this is the release that put Funeral Mist in the rich swede black metal neighborhood without making it over polished or fancy.

The drumming as I said before was upgraded, the classy cymbal work and complex tom fills take the band’s percussion department to a whole new level. The double bass and snare are relentless as always but more precise, almost mechanical but without killing the performer's natural execution dynamics, it's brilliant. Bass guitar is seen as something more than a mere companion, it has a nice distortion and there are some arrangements where it stands out over the guitars, especially in calm arpeggio parts. It's levels are also well balanced. The guitar tone is acid, bright, raw and full of treble and a gain with lots of ground noise and equalized with almost no bass, the scales used in the riffs are not particularly harmonic but there are some passages like the end of 'Anti-flesh Nimbus' where they use guitar lines that sound almost ecclesiastical. Arioch’s vocals are always in top form, bragging about his wide range of growls, shrieks and storytelling mysterious voices.