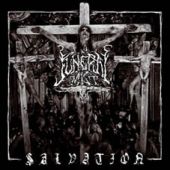 Black metal is a genre that's been quite controversial ever since the second wave started in Norway. Nowadays, most of these groups have survived and earned their status due to those controversies more than their actual music. Many bands nowadays have followed in the steps of the "trve kvlt" bands, often repeating formulas and patterns. One of the reasons why I find it hard to get into black metal is because many bands tend to sound the same. However, despite the simplicity that the music in here has, this is an album that deserves recognition.

Funeral Mist is a band that is deserving of more attention. Sure, the main band behind this project is the current vocalist of Marduk, but I'd dare to say that this little project of his is as good (if not better) than Marduk. Released in 2003, Salvation is one of the most chaotic, cold, hate-filled albums ever made in the history of black metal.

The music in this album is very simplistic, yet powerfully executed. I've seen that this band is known as a "Norsecore band that doesn't suck". To clarify, Norsecore is a term used to describe bands who play extremely fast with little creativity, often repeating the same thing over and over. While this can describe Funeral Mist's music, it would be wrong to judge them just for that term. There's more to this than just the music. The atmosphere in this album is permeated with a thick, cold hatred that is spewn through Arioch's words in every song. You can pretty much see him standing on a podium, addressing the entire world about the darkness that is being unfold. This is reinforced through certain segments of inverted vocals passages, samples, vocals and recording manipulation. The production here is quite good as well, despite the lack of bass. Guitars are cold, razor-sharp. Drums are pummeling, like hammers. But the main attraction here, and what provokes the most positive reaction, is Arioch's vocals.

This album has, perhaps, one of the most interesting and hate-fueled vocals ever made in black metal. His vocals are a bit more growlish than the standard commonly known for black metal, while also using a wide range of shrieks, grunts and pitch-shifted vocals. However, he is not limited to use certain techniques on specific tracks, as every song features layers of vocals. From start to finish, you will not hear just one voice constantly singing, but a multitude of vocals, like the most wretched of church choirs. While this was an element already explored before (Devilry EP), it's in this album that all the potential is unleashed, the result being an atmosphere drenched in hatred and horror.

The music itself, as mentioned before, is very simplistic. Every song features pretty much around 2-3 riffs for their entire duration, yet it doesn't need more than that to cause an impression. Throughout the album, the music is blasting at full speed, barely giving you any peace. 'Agnus Dei' and it's follow-up, 'Breathing Wounds', will showcase the blasting rage of Salvation, while 'Circle of Eyes' will grab your attention and test your patience, with a near 13-minute duration, encompassing devilish vocals and religious chants.

Lastly, I'd like to speak about the lyrics. Salvation is considered by many to be the first album in the Orthodox Black Metal movement. The lyrics in this album are religious, though not in the good way. As another reviewer noted, the lyrics rise to biblical level, perverted to showcase the entire opposite, sometimes being taken directly from real christian sources ('In Manus Tuas's' lyrics are taken from a prayer, with only one word of difference). Every word spoken in this record is meant to illustrate the absolute dystopia Arioch has envisioned. A world of pure chaos, blasphemy, hatred and death.

Let not the cover art fool you into thinking this is some sort of edgy album. This is a magnificent work, a one-of-a-kind album. While the following albums are as good as this one, Salvation leaves a terrifying impression upon the first listen. Like many other albums, it's quite hard to listen to the first time, as the chaothic sound may turn you away from it, but give it a chance and embrace Arioch's Salvation.

Arioch (strings and vocals) and Necromorbus (drums, sound engineering and recording) had already ten years of experience playing in Funeral Mist when they released their first full length, Salvation, in 2003. They had already released one pretty decent demo in 1996 and the excellent Devilry EP from 1998, so you can say this album isn't really a debut. At least in terms of post production, Necromorbus studio abilities showed a big evolution. There are sonic landscapes sampled at the beginning of every track and through the whole record, that blend pretty well with Arioch’s compositions. The final mix in my opinion is kind of poor compared to the Devilry EP, but it seems like an artistic choice because you can hear the master tracks were recorded properly.

In this record there's also listed the contribution of a second guitarist, which I don't consider important because the composition style kept following Arioch’s trademark sound. Even if the mix is shallow and extremely bright, full of treble and featuring a disturbing lack of bass and weight; the black metal cold and harsh atmosphere benefits from that rawness. There's an intention to go back to the lo-fi demo days in terms of sound modeling but with better equipment; even though I think there's a regression in terms of production regarding the previous EP that sounded heavier and more defined and professional. Composition wise it's a natural continuation to the previous work: minimalist black metal with high harmonic tension in every tone interval, basic riffing (fast tremolo picking and power chords). Nothing out of this world or extremely technical but diabolically fast at times and done with good taste.

Profound lyrical concepts are a constant in this band’s career and this record makes no exception. Interesting reflections about the human experience through Satanism are sung by Arioch’s extremely talented multiphasic vocals. He is capable of doing high pitched shrieks and changes to his trademark liturgical narrative tone in a blink of an eye. This second style features a lower register, he has a wide range. The only thing I dislike about this album is the lack of bass in the final mix: it can't be appreciated well individually and fails to give that massive surround feel and it doesn't anchor the rhythm with the melody, both elemental functions of the instrument.