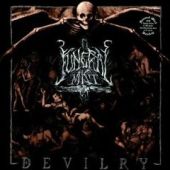 Necromorbus (the drummer featured in the first Funeral Mist records) also manages a recording studio. Despite being recorded at that same place, the difference in terms of production between this EP and the previous demo is notable at first sight. The crudeness of old school black metal is still there, you have your wet and heavily distorted tube preamp gain and reverberations, but the guitar, bass and drum tracks have a lot more weight and are more convincing overall. Little studio fx details (a broken glass, some synthesizers, classical music samples, weird noises) are used to decorate the songs in specific parts and work very well, even if I'm not a fan of sounds not produced by guitars, bass, drums or vocals in metal. The recording and post production studio abilities went up on par with the drum playing, Necromorbus sounds amazing in this record.

The cymbal game is super clean and so are the tom fills, snare paradiddles, double bass and rhythmic patterns overall; everything oriented by the tension levels dictated by riffs, as it should be. These riffs are totally evil, tonal intervals are always super tense, giving that menacing traditional black metal edge to the ferocious drumming in the fast parts. The first song features an interesting chorus, a little bit more melodic and epic -the same goes for some riffsp on the song Funeral Mist, the only that features collaborations from other musicians in songwriting- that contrast the density of the rest of the album without losing intensity. Guitar playing is rather simple, fast tremolo parts and power chords. The bass just goes along with the riffs and can't be fully heard individually but gives the mix a surround feel, working perfectly. Vocals are Arioch’s strongest instrument, aside from being an excellent compositor. The versatility of changing rapidly between high pitched screams and weird, mysterious voices makes him one of the best vocalists in the genre.

Sadly the record is just 20 minutes long, it leaves you wanting some more. Re-releases include the band's previous demo as bonus tracks, which is a nice feature as well. Overall this is a very strong album I would recommend to any black metal fan, because even if it's not the most eclectic and generic type of black metal; it is still relentless and aggressive, and the experimental and intriguing elements that distinct the band mix perfectly with the negative and obscure nature of the genre. Released in 1998, you can say this album is right on the edge between old school and modern tendencies in extreme metal. The concept of the band is extremely defined and well coined, pretty much what you can expect from a one man band.