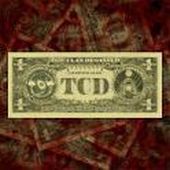 Type:
Release Date: 2009
Label: Lime Records
Genre: Heavy
1 Swinging Like Jesus
2 I Am Because We Are
3 T.C. Lethbridge (Julian Cope Cover)
4 A Beautiful Start To The End Of The World
5 Devil For A Day
6 More Than War

In reading this bands bio online, they tout themselves as being 'free thinkers', and I found myself to be both intrigued and more than a little sceptical at the same time. Hearing that term could make them a band that literally blows your mind, or it could end up making you want to set them in quick drying cement then shoving them off a boat over the deepest ocean trench where it can sink then never see the light of day again.

I was surprised to hear the first track thunder its way into my ears, and it really did make me look at the speaker when it did. It sounds strangely like Gwar to me, but in a slightly different tilt... the heaviness was more brutal. As I went further through the tracks, it became apparent that it also reminded me of the very first Grave Digger album mixing into it all. How this band was using simplicity to such deadly effect, I was more than impressed.

The lyrics are quite comical at the best of times, yet each word seems to ring with a ironic sort of intelligence to them. Songs like 'Swing Like Judas' is blasphemously funny to any religious zealot that accidentally has started to listen to the band... while the lyrics of 'A Beautiful Start Of The End Of The World' seems to be intelligence delivered with their collective tongues in their cheeks here... beautiful, yet when you get it ... it is awesome.

I was expecting some new sort of progressive band that would push the boundaries of the music while delivering smart lyrics. What I got was a melting pot of different thoughts and expressions that are done with music that is actually fun (but not at all complex).

When you can deliver such ideas, and do it so simply... you gotta think there is much more going on between the members of The Clan Destined ears beside getting high and trying to have a big debate about which are better: Smarties or M&Ms. You get a amazing band, that knows how to balance things out.