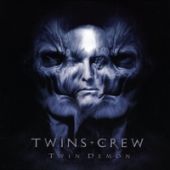 Old School metal has been rearing it's head, as the metal world now is discovering it all over again. In the glut of bands that try to play it, without sounding like a cliche... only a few keeps it sounding fresh while paying great reverence to our rocking past... Twins Crew does it better than anyone I could ever imagined.

With the sheer force of Halloween, the crushing riffing blasts of Megadeth, musicality of Queensryche and add in the influences of Iron Maiden along with most of the NWBHM... Sweden based Twins Crew shows us a few new wrinkles in our chromed past... breaking the Death and Black Metal standards that their country has woven.

Identical twin brothers David and Dennis Janglov sling the guitars like none other in a very long time. They have that certain combination of speed, technique, soaring melodies and brutal power that has always defined metal in every sense of the word. The rest of the band: Vocalist Andreas Larsson and Bassist Frederick Hammar and the sheer pounding beats of Uno Eriksson, bring forth that spirit and brings you to your knees. They combine to show you that the basics of metal are alive, and have a place in the world today.

They have penned some metal masterpieces, anthems that must be shouted out over and over again. Songs like 'Twin Demon' and the overly catchy and seriously infectious 'Heavy Metal Nation' are what fills our hearts with pride, and makes us flash the horns a little higher into the air. This is metal at it's glory, where no other music could ever get us lowly humans to rally behind and show who and what we are.

Throw your horned salute to the flag of Metal, Twins Crew are honestly the real deal here. They are making metal proud once again... and times two also.