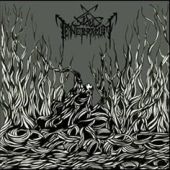 Italian black metal is certainly pretty good... but I find that there is too much of a good thing as well. Enter Sidus Tenebrarum... another band that is trying to take the BM world by storm. Will it be a Hurricane that destroys all that it touches... or is it just a light drizzle that barely waters your mother petunias?

One listen to Born From The Dark Rib, and it is clear that it is very ghastly, mean and quite nasty as hell. Sidus Tenebrarum seems to have all of the parts together for a great insidious album, like their first EP was. This new release is very rude, darkly obnoxious and sends signals for the pits of hell to open up and swallow this world... but it seems all put on in a facade sort of way. There is fire stoking in the band’s collective dark hearts, but no substance to any of the music. It comes at you, tries to strike a wicked blow... yet simply fades off into nothingness. It is actually sad!

Utterly forgettable, that is what Sidus Tenebrarum's Born From The Dark Rib is. As predictable as it is heavy, this is like many other releases out there and never really stands itself out once. It is a good album to hear, but has nothing to make you want to listen to it again. It is, unfortunately, one of those releases that had promise, and fell short in the end.

I enjoyed it, but not enough to recommend it to anyone. It is just an average Black Metal album that I have heard before... but it could have been something a whole lot more. It is, just that and nothing more. Their previous EP they had out in 2004 (Dimlight) was way better than this new outing was... it is a step backwards in the truest word of it, I hate to report something like this.