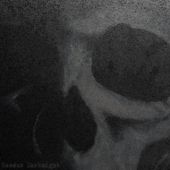 Hauntingly and soul chilling heavy... that would be the first way that I would have to explain about Saedus Darknight... who is a one man metal army bent on delivering you some of the meanest most darkest of Black Metal around. This is not for the faint of heart in any way, this is bare chested Black Metal at its zenith.

With vocals that could be only described as pretty much Satan- like, that alone seriously sets the tone for this seriously twisted and grandly black laden album. It reminds me when I had heard the mighty Emperor for the very first time... yet Saedus Darknight is great in it's own right. This perhaps is the perfectly scripted blue print for Black Metal that is done well.

The only things I can critique is the production. Although not done that bad, it still needed some work. Perhaps it was hurried, or done for effect... either way, it was not one of my favourites when it came down to production value. It was the music and the lyrics that kept me intrigued and entertained. It was a grand journey into the pits of hell themselves.

All in all, a dark delight... one that I must say is great to hear, despite the production. I predict if this man irons out the glitches... we might have another force like the late great Quorthon. That is large to say, but in this case it needed to be said.