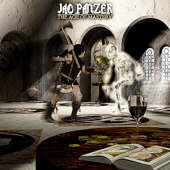 No, don’t compare them with Iced Earth ‘cuz they’re not -that- much harder. More like typical old-school heavy metal. This is an album that would have made a nice release in 1985, and it seems that’s how long this fairly unknown band has been around for, only recently did they cut a deal with Century Media and were finally able to unleash all their pent-up fury and musical potential. Well, what can I say, judging by this album, I’m not too impressed...

Sure there is the energy and the heaviness that all contribute to a decent album, as well as some really good solos, but this album is missing just one very important thing: originality. How can an album that sounds like something from the early 80’s ever excite me nowadays, when the metal scene has now evolved so much beyond that with bands like Children Of Bodom and Dimmu Borgir and Amorphis and countless others that have their own, unique sound. Jag Panzer are just stuck in a time warp and seriously need to do something distinctly their own, if they wanna gain some attention from the scene. Maybe they’re trying to keep this style of metal alive or something but it doesn’t do a thing for me.

The song structure is the normal, boring verse/chorus/verse/chorus/solo... kind that’s been used to death. Harry Conklin’s vocals are crisp and clear, true old-school style and the solos are just amazing. They’ve also got a keyboard player who adds synths that contribute to the feeling and character in the songs, most notably in the opener track. "The Moors" is my favorite track because it sounds nothing like the others, and has a passionate English medieval sound and choir that just stirs the blood. Thoughts of knights and chivalry are immediately conjured. The production could be better, the guitars sound tinny and the vocals are too loud, and the bass drum is almost completely inaudible. It’s good music any way you put it but their style has long since gotten old.