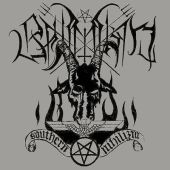 My first reaction to Bahimiron's "Southern Nihilizm" was "Ugh", as I saw the bad case of corpsepaint on the back cover. Immediately pessimistic, I did not look forward to listening to this album at all. However, as it started playing, I did not find myself cringing as I had suspected I would.
After an 'eerie' attempt at an intro complete with screaming girls, a medley of razor-sharp guitars ensued, accompanied by echoed vocals with a little too much variation- a monster-like low to a nice gritty high, and average drums that don't do anything interesting but at least to my relief, switch things up every once in a while. The sound is tinny and relatively treble-heavy, as was likely the intention. The riffs are decent, speed-picked "one-liners" typical of black metal. The melodies and aggression is reminiscent of 90s, "un-Norwegian" Black Metal, loosely comparable to the feelings conjured by early-Marduk (Ahhh... the good old days!), especially on say, track six, 'Pillz And 90 Proof' (haha, witty spelling... I suppose it matches the song titles 'Halo Of Fliez' and 'Southern Nihilizm'...).
The vocalist seems to still be experimenting with what works, or he's just throwing in 'the works' thinking or hoping it will sound evil to the max. Though a bit ridiculous, this medley of hideous utterings illuminates a fundamental aspect of Black Metal- a balance of hilarious yet serious. The song structures could stand to be tightened and the amount of musical variation restricted and fine-tuned. I feel a further limiting of the melodies in the guitars would enhance things a bit. There's just too much crazy shit going on- demonic-sounding samples, wierd vocal add-ins, crazy guitar shit here and there... which overall makes the album sound sloppy. This is where I take away most of the points. I do however appreciate the chants which have an etherial air, creating a "possessed" reaction within the listener. They are perhaps the one thing that make Bahimiron stand out from others of this style, though that could stand to be refined as well.
Though there is much room for improvement, this brings me back to my teenage years of discovering the underworld of Black Metal. This album is pretty straight-forward fast Black Metal with no keyboards and no clean-vocals (discluding the chants which I classify as atmosphere). It's the head-nodding, hands in pockets, grimace-faced, "no mosh" stuff.
If you don't know what I mean by this, well, I suppose the answer is somewhere on the Internet by now... "Southern Nihilizm", in my book, is an alright Black Metal album short of amazing, and a nice trip down memory lane.