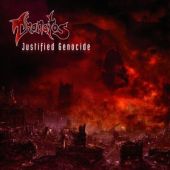 Hail of Bullets, Asphyx, Thanatos – already these three names indicate the importance of the Dutch death metal scene. Okay, its protagonists love to play in more than just one band and therefore a tinge of incest lies over this morbid community. However, I see no reason why the Norwegian black metal freaks should have a monopoly on this form of making things bigger than they are. Finally, it just feels good that guys like Stephan Gebédi, who is musically active for more than three decades, spread their creativity not only under one banner.

Justified Genocide (didn’t know that such thing exists, stupid me) is no milestone in terms of death metal or death thrash metal, but it scores with a more or less perfect production. Thanatos present a powerful, transparent and voluminous sound which is extremely aggressive and with a lot of pressure. Its mighty wickedness becomes clear in particular when listening to 'Dawn of Eternity'. The sound makes the difference between the original of Massacre and the cover of Thanatos. Another question is whether it was really necessary to record this track anew, because the Dutch commando forgot to integrate a grain of individuality. Additionally, another well-known classic closes the album. 'The Burning of Sodom' makes the Dark Angel fly again and that’s good, but Thanatos should have taken care of the old rule that one should not cover songs no one can make better.

Death thrash formations have different options. Some deliver just an ultra-vehement mix of blast beats, in agony howling guitars and rabid vocals, some try to widen the narrow subgenre frame with an inappropriate dose of technical complexity and the weak ones deliver nothing but noisy nonsense. However, the best bands create a barbaric catchiness that has nothing in common with the cheesy trivialities the established music industry calls catchy. Thanatos vote for this option from time to time, for example at the beginning of 'Destruction.Chaos.Creation.' and especially during the best parts of 'The Netherworld' (the beginning and the end). There are more details that rise from the basic inferno, short, nearly melancholic solos or mid-paced, stomping sequences. The opening riff of the title track also promises a great number with its somewhat tragic flavor, but Thanatos do not always give the riffs the space they would actually need to shine in full bloom.

The lyrics of 'The Netherworld' deal with the Holocaust and this topic makes the song all the more intensive. It offers many layers of violence, a lot of tempo shifts, effervescent guitars and precisely killing drums. Thus, it marks a good representative of the whole album if we neglect the fact that the remaining songs are slightly weaker but still stable. Thanatos do not dare to conduct any kind of experiment and they should have kept a closer eye on more memorable lines, but these things do not conceal that Justified Genocide is a good album that satisfies the needs of the supporters of the subgenre – and it holds a late, little highlight, the fatalistic, slow-paced 'Apostles of Damnation'.

In a last couple of years metal scene got back quite a few excellent bands that just disappeared or decided to call it quits years back for whatever reasons. Now they've come back to kick some ass again. Thanatos is one of them and after listening to "Justified Genocide" I must say that I welcome the boys back with my arms wide open.

Last time I've heard Thanatos (if I remember correctly!) I've listened to "Realms Of Ecstasy" somewhere back around 1992/93. I know that there are albums that the band recorded and put out between now and then but I didn't have the chance to listen to any of them. I remember that back in 1992 Thanatos created quite a stir in the scene playing mixture of Death and Thrash Metal and doing it mighty well. "Realms Of Ecstasy" was one of my favorite albums back then so when I got their newest album "Justified Genocide" I expected some good 'ol ass whooping. New album tends to be more old school, straightforward, neck breaking, ass kicking Thrash Metal instead of Death Thrash but let me tell you something: this is the best Thrash I've heard in a long while and I can only compare it to the best out there!!!! I honestly cannot believe that music that I find on this disc was shelved for so long and no one had enough brains to put it out. All songs on this release are instant classics in the genre and are milestones not only in Thanatos discography but in all Thrash music.

What really amazes me about the album the most is the fact that all compositions are so different from each other but yet are completing one another. All easily recognizable either by awesome solo or guitar melody, unique riff or scream along chorus. All superbly crafted and recorded with wicked lyrics and all around energy. Whole album boils with ideas, riffs, innovation and dynamics. It all seems effortless and enthusiastic but at the same time angry, furious and brutal. Recording and production play a huge role here being simply exquisite and mix and mastering are done by Dan Swano, which speaks for itself. I could try and talk about guitars, drums, vocal lines and such but no words can describe what's being delivered through my speakers. "Justified Genocide" needs to be heard and needs to be listened loud. I cannot skip mentioning of very original album cover done by bass player Marco De Bruin. This something that really enhances the whole listening experience. It's an artwork that visualizes and brings to life some of the topics that are screamed, barked and/or growled by Stephan Gebedi throughout the album. It's an artwork that definitely pushes the imagination towards dark, depression and sadness. Another thing that I have to mention is addition of two re-recorded songs ('And Jesus Wept' and cover of Dark Angel 'The Burning Of Sodom') that are from 2006 7" record and are almost beyond reach anywhere. I' am almost positive that they sound better than originals!! There's also cover of Massacre's 'Dawn Of Eternity' that adds an extra kick in the face just in case some of us would still be standing.

"Justified Genocide" is right now on top of my play list and seems like it will stay there for a while. I highly recommend this album to any and all metalheads that still enjoy good 'ol honest Thrash Metal and have enough heart and courage to do some serious headbanging. When I think about the album I think it should come with a warning: There are 12 songs on the album- stretch before going nuts and headbang carefully!!