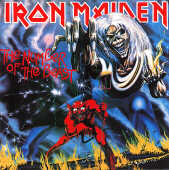 Before the Killers tour wrapped up, singer Paul Di'anno had discussed his departure with the rest of the band. They both decided to part ways and recruit their next singer Bruce Dickinson after hearing him sing Di'anno's material. As the story goes Di'anno had been struggling with substance abuse and was growing lethargic from the band's rapid pace. Iron Maiden operated in a business minded manner by setting goals, operating on deadlines and time tables, even making commitments months, even years in advance. So, when singer Di'anno was dismissed it not only momentarily slowed the band down, but was also a small gamble. It was with Di'anno they had put out two successful albums, sold out headlining tours, and toured with some of the biggest names in the heavy metal industry such as Judas Priest and Kiss. Di'anno up until this point had a great track record and was even improving as a singer both in the studio and live. Their new singer was going to have fill some very large shoes.

Enter Bruce Dickinson formerly the singer for the band Samson. After hearing him sing Di'anno's material the band hired him on the spot. Soon after they would start writing for their 1982 album The Number of the Beast. The band gave the fans a sneak peak of what was to come in live shows playing 'Children of the Damned' and '22 Acacia Avenue' but only time would tell what the band would sound like on record. Upon its release 'Invaders' would be most listeners first time hearing the new singer. Dickinson sings in a higher register than the previous voice of Iron Maiden, and arguably utilizes his most powerful vocal performance of his entire career here. It's on tracks like the album's opener where Dickinson is showing off the higher ends of his vocal range where his voice literally soars over 'Invaders' speed metal complexity and by the album's closer showcasing his baritone and ability to really hold and stretch the notes for a long duration of time. Then you have the intro to 'The Number of the Beast' in which he releases this hair-raising shriek you'd expect to hear from an unhinged thrash metal band.

Bruce Dickinson made a strong first impression on his debut with Iron Maiden, but the rest of the band bring their A-game as well for the most part. I cannot say that this album is the flawless masterpiece that many have made it out to be. There are moments of genius, but some of the material here is filler. 'Gangland', 'The Prisoner' and 'Total Eclipse' are the worst offenders, contributing very little to the album. 'Gangland's' only saving grace being the dual guitar solo between axemen Dave Murray and Adrian Smith, but in other parts of the song the guitars are doing nothing but allowing a powerchord to ring out. The guitar riff for the verse of the song is particularly repetitive, quickly outstaying its welcome. Coincidentally, Clive Burr really shines on this track, but his prowess alone cannot rescue it from the depths of mediocrity. 'Total Eclipse' commits the unpardonable sin of being boring, and 'The Prisoner' has my vote for being the absolute worst song on the album.

With that out of the way though, there is a lot of expert craftsmanship at work. I know a lot of listeners tend to take beef with the album's opener 'Invaders', and for good reason. The song's chorus finds Bruce yelping out "Invaders! PILLAGING!" followed by this ridiculous arpeggio lead guitar riff that comes out of nowhere and leaves a stain on the song. Just like that, a perfectly good track ruined because whichever guitarist responsible for this wanted to play clown metal and practice their scales right there in the studio. 'Invaders' leaves me feeling awkward, and not in any kind of artsy fartsy Avant Garde way, but in a way that is truly unwelcome. Despite this glaring flaw, 'Invaders' is actually the most intricate song on the album. The guitars and bass duel for your attention, the riffs are well thought out pentatonic blues licks delivered in a sharp speed metal fashion, the chorus totally changes pace, and like I said is uncharacteristically goofy for Iron Maiden standards. The song comes to an instrumental section where it picks up momentum with a ripping guitar solo which competes with the alternating rhythm guitar riffs laid under it that really keep the song moving forward.

Chances are even if you haven't heard this album, you've probably heard the singles 'The Number of the Beast' and 'Run to the Hills', both of which are indeed strong songs, but I would nominate the epic 'Hallowed be thy Name' and '22 Acacia Avenue' to be the best the album has to offer. Out of all the songs here, '22 Acacia Avenue' sounds like something that could have been on one of the previous albums with Paul Di'anno. It has a punk rock edge to it and for is reminiscent of 'Charlotte the Harlot' from the debut album. Like all the other really good songs on this album, a lot of ideas are explored here while keeping the song on a focused path. The same can be said for 'Hallowed be thy Name', which is arguably the best song Iron Maiden have ever produced. Starting off as a brooding and somber yet softer sounding track as Dickinson's baritone gives the listener a sense that the song is about to open proper. Adrian and Dave open up to a motif that returns throughout the song in different formats, and because of these projects this unrelenting speed metal soundscape that only builds all the way up to the end of the album. This is the perfect way close out one of Iron Maiden's finest releases in their discography.

There may be some filler here and there, but the highs certainly make up for the lows. Bruce's debut with Maiden may have been an important album to further propel them into success, but on its own merit does not manage to retain the energy it has on half the songs it presents. Dickinson was a good fit and a good instinctual choice to replace Di'anno, and while I believe this is one of his strongest moments as a vocalist, Number of the Beast was only an appetizer for what was yet to come.

Superchard gets super hard for:
'22 Acacia Avenue'
'Run to the Hills'
'The Number of the Beast'