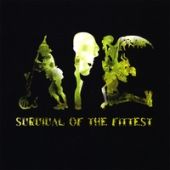 Type:
Release Date: 2009
Label: Barred Records
Genre: Groove, Heavy
1 It's All My Fault (This Time)
2 It's Not
3 Messin' Around With Love
4 Survival Of The Fittest
5 Beyond The Depths Of Reality
6 So Lonely
7 Irate Primate
8 How You Left Me
9 Friend Or Foe
10 Barred

Coming across as this really interesting musical bridge between Hard Rock, Classic Rock, some Progressive elements that all are beefed up with straight ahead party time metal... Toronto, Canada’s Ape stands as this rather set aside oddity on the music landscape. This quirky yet talented band seems to really set themselves up in the roll of different.

Seriously they come across as this odd cross-bred sort of animal that has parts of System Of A Down, April Wine and Nickleback sandwiched with metallized versions of The Tragically Hip and the classic Rush thrown in there for good measures. They take it all of their influences, put it in a blender and what comes out is originality with listenability.

One listen to the brilliantly penned ‘Messin’ Around With Love’ seems like it could possibly be a radio hit on any modern rock station anywhere while ‘Beyond The Depths Of Reality’ is a melodic metallic styled romp that is so hard to ignore because the melody sticks in your head and refuses to leave. With so many musical weapons in their arsenal... it is hard to dismiss this remarkable band.

Some rather bad production decisions in some places takes away a little from the bands performance, but the album is one that I found to be interesting every time I played it. Ape seems to be shooting on all cylinders as they make their own way through the mass changes of musical ideas. They are clearly some of the strongest musicians and are also as equally strong as songwriters as well. It just seems to pay off to being different... in the rock scene in Canada, they are..

Ape’s "Survival Of The Fittest" album seems to grow on you like a fine wine or a really well brewed beer. I have to say that I do want them to explore a little bit more on their heavier (metal) side of the band. A tad bit more than what they do... but as it stands now I won’t complain very much with what this is either. It is good... but it could be a touch better.