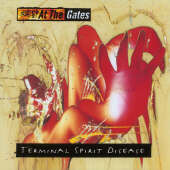 After a very pretty introduction, the album Terminal Spirit Disease gets off to a fast start. Thankfully, it doesn't overstay its welcome at six songs in length. The music here forms the blueprint for melodic death metal before the slightly more refined Slaughter of the Soul came along and refined the genre forever.

This album still has some noticeable improvements over the earlier albums. First of all is Thomas Lindberg's vocals, which are now put in the acidic forefront of the music. Second of all is a more poignant production job that lets the melodies run through nicely. This album still isn't perfect, however. The greater run lengths of the next two albums allowed for more ideas to be incorporated and the formula to be further refined. There is still a nice blueprint for melodic music to be found on this disc. The music has greater melody and greater catchiness than the earlier albums. Don't think depth is forsaken for these newfound wondrous melodies, however. The songs, such as the awesome title track 'Terminal Spirit Disease' have plenty of nuances and reasons to give the album further listens. It's actually a very close race between this album, Slaughter of the Soul and At War With Reality for the best album that At the Gates put out. The differences in the albums are minor and all three are essential listening for the At the Gates fan. I think this album makes a nice use of its runtime and gives you powerful tracks in a short period of time.

It's like a Reign in Blood experience, but one that is all the more poignant because of melodic tendencies. Listening to Terminal Spirit Disease is a mandatory experience for anyone calling themselves a metal head, but the band would get even better on future releases.